GoddessGirls #6: Aphrodite the Diva will be in stores on August 9th!
We're celebrating on a blog tour with lots of giveaways, including one right here on
SMACK DAB
See below to enter to win! 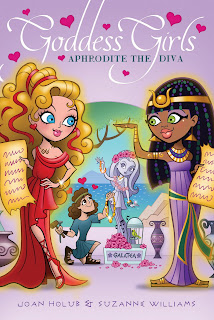 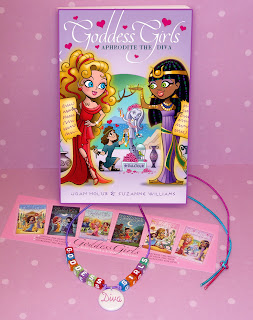 * GODDESSGIRLS bead necklaces made by Joan and Suzanne.
Strung on colorful stretchy cord, they can be shortened into bracelets. (Beads &amp; cord packages purchased at Michaels say they're not for under age 14. Actual colors will vary.)
* Aphrodite the Diva book signed by Joan and Suzanne
* Bookmark featuring six Goddess Girls books
TO ENTER:
Drop a comment on this blog with a contact email.
We'll use it only to notify you if you win.
"Follow" this blog and/or become a Facebook Fan of the Goddess Girls. (optional)
Good luck and Thanks!  --Joan & Suzanne
USA only. Void where prohibited. Contest runs Aug. 1 - 15. Winner's name will be posted in a comment on this blog by August 20. Winner must contact me with a snailmail  I can mail to by August 27, 2011 or prize is forfeited and another winner will be chosen. Prize will be mailed out within ten days of receiving snailmail address from winner. Not responsible for misdirected or lost mailings or emailings. Thanks for playing!!!
Goddess Girls series scoop:
Join the class at Mount Olympus Academy with Goddess Girls, a new series that puts a modern spin on classic Greek myths!

"Readers familiar with Greek myths should get a kick out of this plucky restaging."  ~Publisher's Weekly

Athena the Brain Finding out she’s a goddess and being sent to Mount Olympus brings Athena new friends, a weird dad, and the meanest girl in mythology—Medusa!
Persephone the Phony Hiding her feelings works fine for Persephone until she meets a guy she can be herself with—Hades, the bad-boy of the Underworld.
Aphrodite the Beauty Sure Aphrodite is beautiful, but it’s not always easy being the goddessgirl of love.
Artemis the Brave She may be the goddess of the hunt, but that doesn’t mean Artemis always feels brave.
Athena the Wise Zeus says Heracles has to do twelve tasks or he'll get kicked out of MOA! Although she's not sure it's wise, Athena agrees to help out.
NEW! Aphrodite the Diva Isis claims she's the goddess of love? Ha! But to keep the title all to herself, Aphrodite has to find the perfect match for Pygmalion, the most annoying boy ever. (August 9, 2011)

Artemis the Loyal  It’s time for the annual Olympic Games, and Artemis and her friends are not happy. It’s boys only.  Not fair! (Dec. 2011)
Medusa the Mean  When Medusa discovers an ad for a necklace that promises immortality, this looks like her best shot at becoming popular and having her supercrush, Poseidon, finally notice her. Can this "meanie" get what she wants and also prove that there's more to her that meets the eye? (Apr. 2012)