Get out the wooden stakes and hunt down self-doubt. 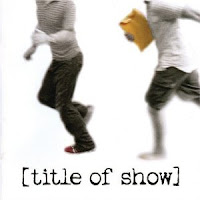 I have a dilemma.

Our theme this month is dealing with negative thoughts. I have a way of doing this. But… well, I’m a little reluctant to share it here. Not because it’s a big secret but because…

See, I’m a huge musical theatre fan. I really think that 90% of all problems can be found in songs from musicals. (Trust me on this.) And there’s a wonderful musical called [TITLE OF SHOW] (yes, that’s the name) that I often turn to when I’m experiencing doubt. The show, [TOS] to its fans, is about two guys trying to write a musical about two guys trying to write a musical. You can’t get any more meta than that. That’s, of course, the story. What it’s really about is the creative process. The show looks at all the different steps involved in making art: generating ideas, experimenting, dealing with criticism/suggestions, etc.

My favorite song from the show is called “Die, Vampire, Die!” It’s the song that deals with self-doubt. In it, we learn that a vampire is “is any person or thought or feeling that stands between you and your creative self expression.” This might be your grandmother disapproving of bad language in your writing or even a niggling voice in the back of your head asking, “What’s so special about you?” The song looks at all the different ways “vampires” can interfere with the creative process and offers advice for anyone afflicted.

It’s a great song, packed with honesty, humor, and hope.

Normally, as I’ve done on other blogs, I would embed a Youtube file of the song but… I feel that would be wildly inappropriate here. However, I do recommend that any artist—writer, painter, dancer, what have you—should listen to this song. They should embrace it and wrap themselves in it and use it as a happy place to go to when confronted with any of the situations presented in the song. If you’re over the age of eighteen and would like to hear the song, follow this link. You’ll thank me.

I sometimes have a little pity party where I'm convinced I've been allotted more than my share of self-doubt. The vampires in my mind put Dracula to shame. So I listen to this song a lot. A LOT. It really is the best thing I've found to get past the crippling fear that I'm just a schmuck with a keyboard and that, yes, I can be creative and write things that people enjoy. I hope it helps you as much as it has helped me.