In the deep and distant past of 1998, after spending five years writing Firegold, my first novel, and five more years trying to sell it, I finally received an offer from a publisher. In my joy and innocence, I didn’t know I had just entered a fantasy world. I didn’t know that along with shining splendors, there would also be dark labyrinths, gilded cages, pitfalls, and deserts without a drop of water. Even if someone had told me, I would not have believed them.

After Firegold came out, I did everything to promote it—in those days that meant sending out press kits, arranging book signings, school visits. I had an unusual publisher in Winslow Press; they still believed in flying their authors to librarian’s and teacher’s conferences. I was treated like a princess. One night as I was leaving my hotel with my editor, we bumped into a well published author I knew from SCBWI in Seattle. We chatted a moment. When she learned that my publisher was giving a dinner in my honor, her eyes grew enormous. Now I know why she was surprised. I was a brand new, totally unknown author being treated like a star. When I walked into the restaurant, I was startled to see fifteen round tables, with a copy of Firegold set at every place. At the dinner I spoke briefly. Afterword, a librarian told me, “You are a treasure, and I’m so glad they found you.” Days of splendor indeed.

When Firegold received a starred review—I think it was from Booklist—my publisher sent me roses. Winslow Press took my next book, too, Aria of the Sea. It sold well and won the Mythopoeic Fantasy Award for Children’s Literature that year. Winslow also bought my third novel, White Midnight. They wanted everything. I now think of this time as the First Golden Age.

The castle in the air came crashing down when Winslow Press declared bankruptcy. (Too many dinners lavished on unknown authors?) I was owed thousands of dollars in royalties for Aria of the Sea. I never saw a penny. For many years I begrudged that money, but now I see that the unique experience that Winslow gave me—treating me as I imagine authors were treated in the old days, and only high selling or prestigious award-winning author stars are treated now—had a value of its own. Winslow sold the rights to my books—White Midnight was not yet out only under contract--to Farrar, Straus and Giroux (FSG).

FSG issued Aria of the Sea and Firegold in paperback, and brought out my next two hardcover books—White Midnight and The Phoenix Dance. But after Winslow, FSG was a culture shock. The first shock was the DREADFUL cover they did for White Midnight.

Bookseller after bookseller told me that this cover killed my book in spite of the excellent reviews it received. The bigger shock was that FSG sent me nowhere to promote my books. (Of course, I must say that FSG is still in business, so their thrift must be working for them.) The next shock—my new editor did not like the manuscript of The Phoenix Dance. I changed the book drastically—to its great detriment—something I still regret today. I was still trying to do what people told me. I still thought of my writing as “a career.” My first three books had all been chosen as ALA Best Books for Young Adults. The Phoenix Dance was not.

My editor declined my next fantasy—an early version of Avielle of Rhia. And I do not blame him. I sent it to him too raw, too soon. My agent sent it to Margery Cuyler at Marshall Cavendish, who had been the editorial head of Winslow toward the end. I loved Margery, still do, and always will. Margery must have loved me, too, because she saw promise in Avielle. (To be honest, I think she also saw a later version). Cavendish did a SPLENDID cover. She also bought my first middle grade novel—The Return of Light. 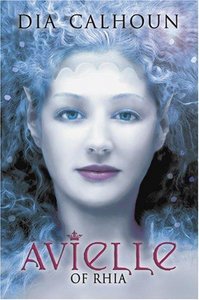 Then Twilight arrived and vampires sucked all the blood out of the fantasy market.

I hate vampires. To this day I believe the connection between sex and death is SICK. I refused to write a vampire book. So I spent two years writing what I still think is a rich and complex fantasy novel in four voices. Nobody nowhere wanted it no how. Still thinking of writing as a career, I studied commercial middle grade fantasy series, and tried my hand at one. Again, nobody nowhere wanted it no how. “It’s not a Dia Calhoun book”, several editors wrote in their rejections. I did not know where to laugh or cry. Nobody wanted a literary, rich and complex “Dia Calhoun book.”

Next, the dystopian and zombie novels hit. I certainly did not want to write one of those either. Then the fairy novels invaded. Again, not interested. I received too much advice from other well-meaning YA authors. “If you want your books to sell to teen girls, spice up the romance, make them hip.” So I wrote yet another fantasy with older characters, romance, and even sex. But my heart was not in it. I wrote it to sell.

While I was writing that book in what I now think of as a spiritual and literary desert, my friend, the amazing verse novelist Lorie Ann Grover, read some poems I had written years ago about my husband’s family’s orchard—the Farm. She told me I was a poet, that I should try my hand at a verse novel. You can’t get less commercial than that!

So I began a verse novel. And something in my heart rekindled. Joy returned to my writing. I stopped caring about the market. I gave up the whole idea of writing as a “career.” I returned to the kind of book I had loved as a girl, books about twelve or thirteen-year-old girls on the brink. Eva of the Farm is a middle grade verse novel inspired by the Farm. While the book is not a fantasy, it is all about the magic of imagination and place. I loved writing it. Loved it.

The first editor my agent sent the manuscript to wrote a jaw-dropping rejection. She suggested, and I kid you not, that I should consider having zombies storm the Farm in order to make the book more current and action-packed. NYET! Eva of the Farm (still sans zombies!) then garnered interest from two publishers. Atheneum will publish the book in July of 2012. A companion volume comes out the following summer. I loved working with my editor, Kiley Frank, who unfortunately has just left publishing.

I am now working on my eighth book with my sixth editor at my fourth publishing house.

I feel like I have entered a second Golden Age—but one quite different from the first one. I no longer dream of awards, or reviews, of being wined and dined at conferences, of speaking to rapt audiences, of writing something “hip.” I no longer want a writing “career.” I will not throw a lavish launch party for Eva of the Farm, or sell my soul on Facebook to try to whip up a feeding frenzy. Emily Dickinson’s poem sums up my feelings about Facebook:

How dreary to be somebody!
How public, like a frog.
To tell your name the livelong day
To an admiring bog!

In this new Golden Age, my only goal is to write a good book, one with a story that has everything—wonderful characters, an engaging plot, gripping ideas, language that sings. I want to create something shining that will endure. I want to revel in a writing life.