Gil Goodson has been studying, training, and preparing for months to compete in the Gollywhopper Games. Everything is at stake. Once Gil makes it through the tricky preliminary rounds and meets his teammates in the fantastical Golly Toy and Game Company, the competition gets tougher. Brainteasers, obstacle courses, mazes, and increasingly difficult puzzles and decisions—not to mention temptations, dilemmas, and new friends (and enemies)—are all that separate Gil from ultimate victory. An interactive and inventive page-turner perfect for young readers who love to solve puzzles!

Wishes, Dares, and How to Stand Up to a Bully - Darlene Beck Jacobson 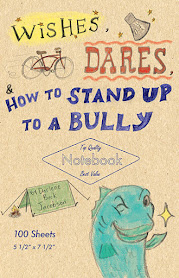 Eleven year old Jack misses his Dad who is MIA in Vietnam. It’s been months since he and his family had word of his whereabouts. The last thing Jack wants to do is spend summer with his grandparents. Mom believes it will be good for them all – Jack, his sister Katy, Mom, Gran and Pops – to be together while they wait for word about Dad. Keeping busy will keep them out of trouble and help them think of other things.

Jack expects the worst summer of his life. The first summer without. Without Dad, without friends, without his room and all the things that remind him of Dad. When Jack meets a girl named Jill - a girl with a brother who makes trouble for both of them – things they believe are turned upside down. Welcome to a summer of fishing, camping, bullies, and a fish who grants wishes. A fish that could be the answer to Jack’s problem. But when Jill makes wishes of her own, things don’t turn out the way they expected.  Every wish has a consequence.

Will the fish grant Jack’s biggest wish?  Will Jack be brave enough to ask? 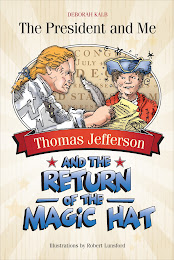 After almost six months in Maryland, fifth-grader Oliver still misses his friends back in New Jersey. But things start to change one day, when his neighbor—and possible new friend—Sam lends Oliver a magic hat that takes him back to the 18th- and 19th-century world of Thomas Jefferson. Oliver and his sisters—Cassie, the nice one, and Ruby, the annoying one—end up learning more about Jefferson than they’d expected. And Oliver finds that his new neighborhood might not be so terrible after all. This new adventure brings back previous characters Sam, Ava, J.P., and of course the cantankerous talking hat itself. 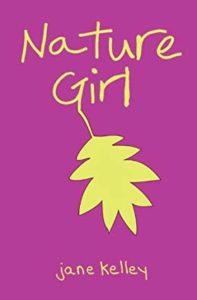 Nature Girl is a laugh-out-loud funny, feel-good tale of self-discovery, growing up, and girl power that gives a fresh twist to the classic survival story! Eleven-year-old Megan is stuck in the wilds of Vermont for the summer with no TV, no Internet, no cell phone, and worst of all, no best friend. So when Megan gets lost on the Appalachian Trail with only her little dog, Arp, for company, she decides she might as well hike all the way to Massachusetts where her best friend, Lucy, is spending her summer. Life of the trail isn’t easy though. And on the journey, Megan faces everything from wild animals and raging rivers to tofu jerky and life without bathrooms. Most of all though, Megan gets to know herself—both who she’s been in the past and who she wants to be in the future—and the journey goes from a spur of the moment lark to a heroic quest to prove herself to Lucy, her family, and the world!

The Girls of Gettysburg - Bobbi Miller 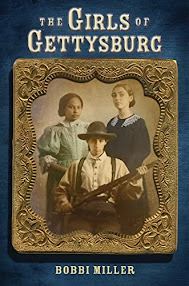 Girls of Gettysburg (Holiday House, 2014) comes recommended by Booklist as “a unique, exciting work.” School Library Journal calls the book a “riveting historical fiction.” Listed as a Hot Pick on Children’s Book Council for September 2014, the book won an honor for the 2015 Thomas Jefferson Cup Overfloweth and an honor for the 2015 Paterson Prize for Books for Young People. It comes recommended by the Historical Novel Society, an international literary society: “This book is gripping, the details strong, and the characters compelling. The historical detail is engrossing, as are the experiences of these three remarkable girls. … it is a wonderful junior companion to the likes of Shaara’s or Peters’ books about the same battle.”

The Junction of Sunshine and Lucky - Holly Schindler 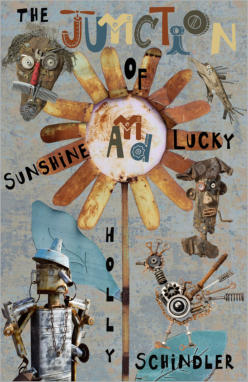 ~How Auggie and Gus save Serendipity Place and find their true calling.~

Auggie Jones thinks she’s an ordinary girl. She lives with her grampa Gus, a trash hauler, in an old house. And even though most of her friends live in the same poorer section of the town of Willow Grove, it seems like everyone has a “shine”—a talent or special ability. Everybody but Auggie, that is.But winds of change begin to blow—a storm tears through Willow Grove, Auggie’s best friend ditches her for a new girl who lives in an upscale house on the well-to-do side of town, and the House Beautification Committee targets Serendipity Place, Auggie’s neighborhood, with fines and threats of demolition.Auggie insists she and her grampa aren’t run-down people. She uses the items from Gus’s trash pickups to reinvent their house and convince everyone (including her old best friend) that she’s every bit as worthy of notice as anyone from the fancier side of Willow Grove.Along the way, Auggie finds her voice, her ability to stand up to those in power, and uncovers an artistic talent that goes far beyond decorating her house. But how could a yard filled with items ready for the junkyard change an entire town’s idea of beauty? How can it save Auggie’s aging neighborhood? And how can rusted, recycled pieces of metal ever become Auggie’s special way to “shine”?

The Junction of Sunshine and Lucky Activity Book - Holly Schindler 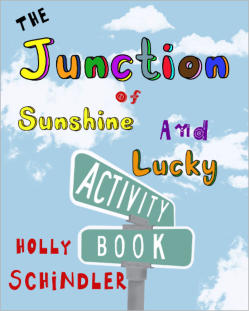 Did you read The Junction of Sunshine and Lucky? Did you cheer for Auggie as she stood up to the House Beautification Committee? Did you wish you were there with her, going to McGunn’s in Old Glory, coming up with sculptures you could create with Gus?Now you can!This activity book is filled with puzzles, pictures to color, and sculptures to finish. Ideas for getting involved in your own community. Ways you can become a folk artist yourself.This book extends the fun of The Junction of Sunshine and Lucky. Makes the story last just a little bit longer. But in many ways, it’s also just the beginning of you finding creative ways to beautify your own world every day.