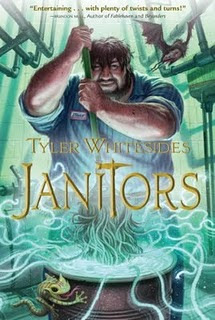 My greatest YES moment happened last fall. I was actively working with two unrelated manuscripts. The first (Janitors) was in submission with Shadow Mountain Publishing. They had been looking at it and reviewing it for some time and I could feel success drawing nearer. The second manuscript was a humorous middle grade that I was using to query agents.

When the good fortune hit, it seemed to strike all at once.

I remember it was a Monday. I received an email from an agent asking to call me. He had read my humorous middle grade manuscript and thought it was close but still needed work. Honestly, I didn't know why he wanted to call. I didn't think he was interested. During our discussion, I was surprised and overjoyed as he made an offer for representation! It was unexpected and thrilling. I hung up the phone feeling that I had just made a huge step forward in my path toward publication.

Only a day or two later, Shadow Mountain Publishing called. They had reached a conclusion about my manuscript and were in a position to make an offer! Again, I was ecstatic. I quickly contacted my newly acquired agent to inform him that we had received an offer. I hadn't told him that Janitors was in submission, so this sudden success was pleasant news to him also. He got in touch with the publisher and negotiations began.

Timing could not have been better. It was a great relief to have a good agent working with my publisher. It was a great blessing to have a publisher that was so enthusiastic about my work. And now, only a year later, Janitors is just a few weeks away from hitting the bookshelves. Watch for it on August 3rd!
Labels: Janitors Publishing News Shadow Mountain Tyler Whitesides