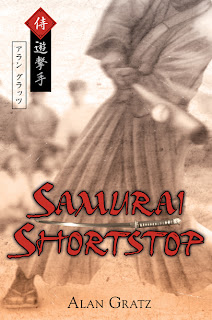 So. My biggest "Yes!" moment. That has to be when I got the call that I had made my first children's book sale.

For three or four years, I had been trying to write books for young readers. My first, After School Heroes, was about a group of teenage superheroes who have to save their city when all the adult superheroes are taken out by a supervillain. I wrote it, edited it, and started sending it out to editors and agents.

Undaunted, I started a second novel. This one was called Inventing Julia, and it was about a high school sophomore boy who is funny and decently good-looking who can't get a date, so he and his friend "invent" a fictional girlfriend for him so real girls will find him more attractive. It works, but he's made his fictional girlfriend so good he can't dump her without losing points with all the real girls at his school. Hilarity ensues, as they say.

But not enough hilarity, apparently, as that book didn't sell either.

Like the oafish lord in Monty Python and the Holy Grail whose castle kept sinking into the swamp, I wasn't ready to give up. I was still submitting After School Heroes and Inventing Julia to editors (I'd given up on agents) when my daughter Jo was born, and I left my job as an eighth grade English teacher to become a stay-at-home dad and a full-time writer. Well, more like a part-time writer, as being a newborn's dad takes a far amount of time.

But the die was cast, so to speak. I'd written two books, I was getting good nibbles but had no bites. I felt like something was about to break. If it didn't, well, my wife and I already had a day circled on the calendar a year away. That's when the money would run out if I hadn't found anything, and I'd have to find a "real" job.

About that time I got fascinated with Japan, and one book led to another until I discovered that Japan's samurai era had ended about the time the baseball era began. It was too good an idea not to jump on it, despite the time it would take me to research it, so I got to work. Samurai Shortstop was the first book I wrote as a "full-time writer"--an occupation I still refused to give when strangers asked what I did--and became my first sale. And just before the money ran out too.

I remember the call very clearly. I had sent in the full manuscript to an editor by request a week before, and was fully expecting another letter in the mailbox saying "thanks, but no thanks." Instead, I got a phone call. It was an editor. A real, live editor. She loved my book, and she wanted to buy it. I played it cool on the phone as my wife looked on, our one-year old in hand, and then erupted after I'd hung up. I did a happy dance with my daughter, much to her confounded delight. She had no idea what the happy dance was for, but I did. Somebody had just said "yes" to my life-long dream of publishing a novel.
Labels: Alan Gratz July 2011