Ever Imagine Your Name on the Silver Screen? by Darlene Beck Jacobson

I just finished reading an imaginative and entertaining book I might have missed if it hadn't been for the title: DARING DARLEEN, QUEEN OF THE SCREEN by Anne Nesbet. Despite the difference in spelling, it isn't often I find my name in books for middle grade readers...especially in a title. That, and the wonderful cover made me pick up the book and find out what was inside. 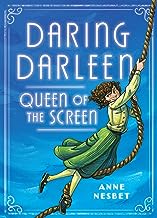 I'm so glad I did.  Set in 1914 during the Silent Film era, Darleen is the heroine of the Serial Films made by her father and uncles titled The Daring Adventures of Darleen Darling. Serials were those "cliff hanger" short films with a damsel in distrees trying to outwit the villain. Think "PERILS OF PAULINE". Movie goers would return week after week to see what happened next as they booed the villain and cheered the heroine.

In this delightful book, Darleen's movie adventures pale in comparison to her real-life ones when she encounters a society girl named Victorine who escaped a failed kidnapping. Darleen hides the girl as they try and figure out the WHO, WHAT, WHY, of Victorine's circumstances. An "escape" novel at its best with the historical element I am drawn to so often in reading and in writing.

Plus a brave and clever heroine alter-ego who takes the younger me on a daring adventure. It isn't every day a girl gets a story in her name. Oh, what fun is is to imagine myself having those long ago adventures on the Silver Screen.

What's not to love about that?!

May you find adventures of your own in 2021!