Writing Myself by Olugbemisola Rhuday-Perkovich 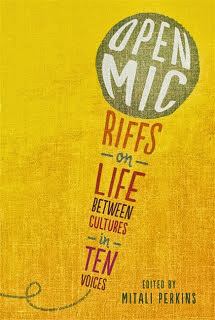 I'm jumping into September feeling a little...exposed, and it's uncomfortable. I think of my public self as an author of fiction, but this month I have two nonfiction publications out, work in which I wrote about...me. I hate talking about myself, and in OPEN MIC: Riffs on Life Between Cultures in Ten Voices, edited by Mitali Perkins, not only do I talk about myself, I talk about my teen self, which was as awkward as you might imagine. In Luke Reynolds' BREAK THESE RULES, I share an idea that has guided me since childhood days -- that in a world when we are often told to constantly speak up and shout out, there is a special value in listening, paying attention -- and *then* speaking up in the way most authentic for ourselves.

So it's a little weird, putting myself, not a character, "out there" like that, but I know it's good. I believe that good writing should involve discomfort. Letting one's world be shaken up a little. Developing a new perspective from exposure to new people, ideas, and things. From trying, and failing, and trying again. 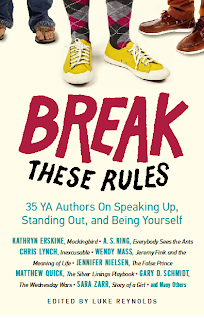 So, I'm working on the next thing. It's a bit of a mess right now, and it's way uncomfortable. But writing autobiographically allowed me to reflect in ways that I already see have benefited my fiction.  And that's exciting.