Skip to main content
Posted by Tamera Will Wissinger September 12, 2013 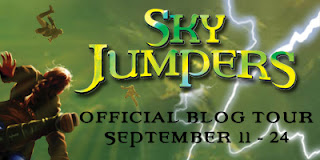 Here is Peggy’s short biography: Peggy Eddleman lives at the foot of the Rocky Mountains in Utah with her husband and their three kids. She enjoys painting, playing games with her family (especially laser tag), and of course, reading. You can visit Peggy online at peggyeddleman.com


Here’s a description of SKY JUMPERS:

Twelve-year-old Hope lives in White Rock, a town struggling to recover from the green bombs of World War III. The bombs destroyed almost everything that came before, so the skill that matters most in White Rock—sometimes it feels like the only thing that matters—is the ability to invent so that the world can regain some of what it’s lost.

But Hope is terrible at inventing and would much rather sneak off to cliff dive into the Bomb’s Breath— the deadly band of air that covers the crater the town lives in— than fail at yet another invention.

When bandits discover that White Rock has invented priceless antibiotics, they invade. The town must choose whether to hand over the medicine and die from disease in the coming months or to die fighting the bandits now. Hope and her friends, Aaren and Brock, might be the only ones who can escape through the Bomb’s Breath and make the dangerous trek over the snow-covered mountain to get help. Inventing won’t help them, but the daring and risk-taking that usually gets Hope into trouble might just save them all.

Now it’s time to hear from our guest:

1. What does your main character, Hope, want?

Hope lives in a town where inventing is more important than anything else. Which is understandable— after the green bombs of WWIII wiped out nearly everything, the inhabitants left would like to move society forward again, and the only way to do that is if people are coming up with amazing inventions. More than anything, Hope wants to be able to invent. She doesn’t care if she’s not the best, or even if she isn’t great at it— she just doesn’t want to be the worst. She wants to not disappoint her teachers, her town, and most of all, she wants to not let her parents down. She knows that her dad wants to run for Council Head, and how can he do that in a town where inventing means so much, when his daughter is the worst at it?

Some serious lack of skill. Not everyone is good at any one given thing. Hope is good at a lot of things, but inventing isn’t one of them, nor will it ever be.

3. Did you know right away that this was your story, or did you discover it as you wrote? How did the story evolve?

It came piece by piece. I got the idea for the Bomb’s Breath– the deadly band of compressed air that covers their valley— first. Then came the setting and their basic situation— that they were a town working to rebuild in a land where the resources weren’t the same, and that they lived 40 years after the bombs that destroyed nearly everything. Long enough after that they’d learned how to live and work with everything, and that most of the people in town have grown up in this situation, but short enough that there were still people around who experienced how things used to be.

4. Was SKY JUMPERS always for middle grade readers or not? If so, why did you choose middle grade?

It was always for middle grade readers. I’ve read middle grade books to my children for years and years, and have a great love for them. When I wrote my very first story— a novella for some friends— and then read it to my kids, I knew that I would be thrilled to write middle grade fiction for the rest of my life. I started right away, and my first book had my children as the main characters. I wrote a few more middle grade books after that, then I got the idea for Sky Jumpers. Middle grade is in my heart, and that’s what naturally comes out when I start getting ideas for a book.

5. What is the best part of writing for middle grade readers?

Middle grade -aged kids are made of awesome. I love being around them! And I love visiting them at schools. Whenever I think of my own childhood, I always go back to those middle grade years. They were some of the most fun of my life, and I love reliving those ages as I write.

6. Your main character’s parents are present, and are actually good parents, which is somewhat of a rarity in middle grade. What challenges did you face in making parents that weren’t absent?

I was thrilled to sell a book with decent parents, because I think they’re so very under-represented in middle grade. Possibly the most important thing about writing middle grade is that the kids have to be the heroes. The challenge comes in getting the kids separated from the responsible adults who would never let them run off into danger to solve all the biggest problems on their own. And that can be quite the challenge! Especially when creating a series, because you have to come up with multiple ways to get the kids on their own, without making the parents look irresponsible. (And always makes me think, THIS is why there are so many orphaned kids and unreliable parents in MG fiction!) It took a lot of drafts and a lot of feedback— in this book and in the sequel— to get that balance just right between the parents making good choices, and the parents letting the kids head off into danger. It has definitely been a challenge, but one I’m glad that I took on.

As a bonus, Peggy is sharing the recently released book trailer for SKY JUMPERS which was featured at the School Library Journal Blog last week! CLICK HERE TO LINK TO THE VIDEO.

Thank you for joining us for a Middleview at Smack Dab Blog, Peggy. Again, congratulations on the release of SKY JUMPERS! We’ll look for it on bookshelves soon!