Why We Write Middle Grade Books

Suzanne and Joan: Hi all! We're jazzed to be part of this new venture, Smack Dab in the Middle. It's an exciting time because Goddess Girls: Athena the Wise releases this week and our blog tour began today with our first giveaway! Squeee! Here's a peek at our April blog tour lineup with bunches more giveaways. (We made the necklaces ourselves.): 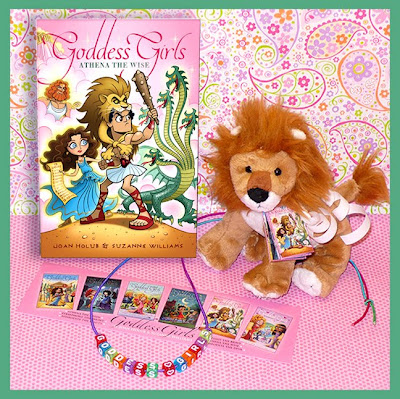 Joan: So ... on to this month's theme at Smack Dab, which is about why we write MG. When Suzanne and I began our publishing careers, neither of us were writing MG. Like many beginning children’s book authors, we started out with picture books. I like to try everything to see if I can do it, so here I am, in MG.
Suzanne: I thought shorter meant easier, which, of course, isn’t true. And to be honest, longer-length books scared me. I had to work my way up from picture books to easy readers to chapter books before I had the confidence to take on MG. Sounds silly now, and maybe it’s a slight exaggeration, but it’s mostly true. Having finally arrived at books for tweens, however, I’m very happy to be here. I love writing for this age group.
Joan: Me, too, Suzanne! Ages 8 – 12 is the range most publishers use to describe MG, and we both read a lot at those ages. One book after another, as a matter of fact. Much of what we both read was series fiction—Nancy Drew, Trixie Belden, etc.
Suzanne: There’s just something so satisfying about sinking into the familiar world of a familiar character book after book. Even though there’s so much vying for young readers’ attention nowadays, series fiction is as popular as it ever was. I’d written four chapter book/MG series and Joan had written five series for varying ages among her 130 published books before we teamed up to write Goddess Girls which, to quote our jacket blurb: “follows the ins and outs of divine social life at Mount Olympus Academy, where the most privileged godboys and goddessgirls in the Greek pantheon hone their mythical skills.”
Joan: We make a great team I think. (I feel a post about author collaboration looming in our future here, don't you think, Suzanne?) Part of what makes MG fun to write is that we can develop more complex plots than we can for chapter books. And because book lengths are longer there’s also more room in which to explore characters and the situations you put them in.
Suzanne: Right. Though we still need lots of action and dialogue to keep kids engaged, we get to use more complex sentences and add more descriptive detail. MG readers “get” more sophisticated humor too, while still appreciating puns and slapstick. And adding some light romance won’t make them gag (well, not the girls, anyway!)
Joan: I love humor, mythology, fast-paced plots, and romance. But I also like that we get to explore friendship (and friendship-drama) in a way that rings true and hits the heart.
Suzanne: One last thing that makes writing MG so satisfying for us is that MG readers let you know when they like your books! We get lots of fan email, and messages on our Goddess Girls Facebook page. The (mostly) girls who write us let us know who their favorite characters are and sometimes suggest ideas and characters for future books in the series. Some of them have even played at being goddessgirls themselves, and created new classes and teachers for their own fictional Mount Olympus Academy. And just as exciting to us, they’re taking an interest in Greek mythology and reading up on the original myths.