Trudi Trueit: The View From the Front Row 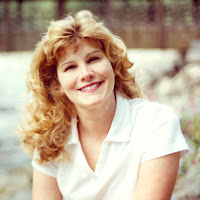 My awkward stage started when I was about nine and stretched through junior high and a good chunk of high school. In the sixth grade, I was a head taller than everyone else in my class. I also had the shortest haircut. And the weirdest glasses (cat's eye tortoise shell). My older sister was beautiful and my younger brother was athletic and I was . . .

I had no clue.

What I felt, honestly, was overlooked. Lost. A little bit empty.

I have many wonderful memories of elementary school, yet it's the ones that stung that seem to be the most vivid (why is that?). I remember the embarrassment of being picked last for softball, dodge ball, or anything 'ball' related. I remember trying to hide a few extra pounds under bulky sweaters. I remember being teased about my height and hair and glasses. Due to my near-sightedness, I had to sit in the front row, which meant somebody had to swap seats with me, which meant I was officially 'Teacher's Pet.'

Fortunately, I discovered books and reading became my blissful escape from the battle scars of life. In the pages of Little Women, Kidnapped, Charlotte's Web, Chronicles of Narnia, Little House on the Prairie, and anything written by E.L. Konigsburg, I found what was missing from my life. I found laughter, beauty, wisdom, gentleness, elegance, mystery, excitement, loyalty, fearlessness, and passion. Day by day, book by book, my emptiness began to fill with possibilities. These characters, these fictional people and talking animals, made me stronger. They gave me courage. They gave me hope.

I started writing as a child and I have never stopped. I've worked as a television news reporter and freelance writer, telling other people's stories. Now I tell my own. I tell them because I know firsthand that words have the power to lift a soul and change a life. I tell them because every ten year-old needs to know that everyone who is, or ever was, ten feels overlooked, lost, and a little bit empty. I tell them because it fills my heart in a way nothing else can, or ever could.