This month, we at Smack Dab in the Middle present our wish for writers, a wish for creative inspiration. A wish for a grand story that takes you out of the ordinary, that presents you with the unexpected, gives you a call to adventure that you cannot help but answer?

Well. We’re working on it.

It so happens, in 1920, J.R.R. Tolkien’s three-year old son, John Francis, asked his famous father , “Who is Father Christmas?” Talk about the unexpected! And Tolkien decided to answer that call. On Christmas Eve, late at night, Tolkien sat down in his study and wrote a letter. In spidery handwriting, in red ink, Tolkien replied as Father Christmas, addressing it from “Christmas House, North Pole.”

For the next 23 years, every Christmas Eve, Tolkien wrote a letter to his four children, telling stories about the misadventures of Father Christmas and his helpers, including the North Polar Bear and his two sidekick cubs, Paksu and Valkotukka. About all the things he broke, firework explosions, the discovery of ancient caves full of old cave drawings, and battles with the goblins The stories oozed with similar motifs as his famous Middle Earth writings. When Father Christmas couldn't write, his Elvish secretary filled in. The letters come alive with Tolkien’s detailed, colorful, fantastical, intricate pictures.

“Dear Children,” begins one letter. “There is a lot to tell you. First of all a Merry Christmas! But there have been lots of adventures you will want to hear about. It all began with the funny noises underground … ” 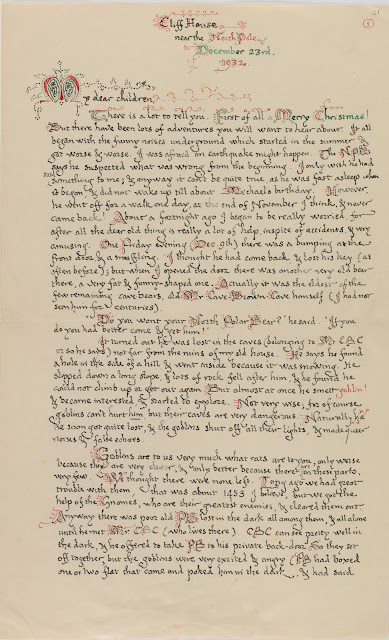 The letters were released posthumously by the Tolkien estate on 2 September 1976, the 3rd anniversary of Tolkien’s death. Come see for yourself, the wonderful adventures of Father Christmas and the great North Polar Bear at The Tolkien Library.

I wish you a happy, inspirational, creative Holiday!