A Lump of Coal -- from Jane Kelley

This holiday season, I would like to give you all a lump of coal.

Wait! What? you say. How could anyone who's reading this blog and loves kids books possibly deserve a dirty black lump? Santa only gives coal to those who who have been naughty. 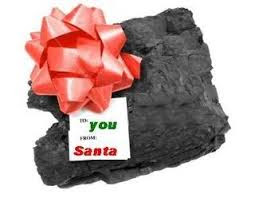 Coal's reputation has gotten even worse since Victorian England. In those days, poor children might actually have preferred to get a piece of fuel to provide a little bit more heat on a cold day. Now we shun it for being the dirtiest of fossil fuels. But I wondered, if I dug deeply enough, would that unwelcome gift have some redeeming qualities?

I searched the internet. I found recipes for lumps of "coal" made out of marshmallows and chocolate cookies. I found many different Santa-esque figures who came down chimneys to put presents in kids' shoes. (Italy had a witch named La Befana!) I found plastic lumps which could be sent as gags. And then I found what I hoped I would.

Send Coal will, for a very modest fee, ship a baseball-sized lump of actual coal to whomever you choose. Anonymously! You can include a message explaining your reasoning for this dubious gift, although they reserve the right to censor some sentiments for legal reasons.

The coal comes from Centralia, Pennsylvania. That town mined coal for over a century. But they had to stop when a vein of coal that ran beneath the town caught fire. It could not be extinguished. The underground heat, the toxic fumes, the sinkholes threatened the citizens who were moved to safety. The fire still burns, as evidenced by plumes of smoke which escape from the vents. Now Centralia is a ghost town, visited by tourists and the people who once lived there.
So, dear readers and writers, you are probably still wondering why I would give you each a lump of coal.

Because I hope that you will grasp whatever lump of life you have discovered. Examine it carefully. Don't take it at its most obvious value. I guarantee you will find a story in it.

Remember that it is the humble, lowly, despised lump of coal that can be turned into diamonds.