I just finished reading the first novel of Philip Pullman's new trilogy, The Book of Dust. He is a master storyteller. I know I should have read the book slowly, to decipher how his realistic characters can thrive in such imaginative, suspenseful plots. But I couldn't. I devoured all 450 pages. So I have started reading it again in hopes of learning how he does what he does.

Reading his interviews have given me a few hints. He described his workspace as having room for lots of books and several power tools. It isn't hard to picture him actually constructing things, like the canoe which is such an important part of the novel I just read. He is a craftsman. And so whenever he describes something he has imagined, like the alethiometer, the mechanisms are so clear that I believe I could actually hold one in my hand. 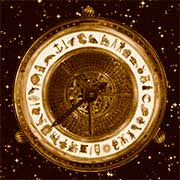 The name alethiometer comes from two Greek words. Aletheia means truth. Meter means to measure.  The characters in this novel and in his earlier trilogy, His Dark Materials, use the alethiometer to guide them.

The device resembles a compass or a clock face with 36 symbols around its circumference. It has four hands. To ask it a question, you point three of the hands at three separate symbols. Then the fourth hand will spin until it points to a fourth symbol. These images provide the answer. Some people, of course, are better at reading it than others. Those who think they already know have a harder time arriving at the truth. What works best, as one of the characters says, is to hold the question in one's mind while simultaneously letting the mind drift toward discovery.

That's exactly how I try to write. I select several separate symbols. I hold them in my mind (and also my heart). I let my mind roam around all the possibilities of what they suggest. And eventually, unless my thinking has become clogged by the predictable, the short-cut, or the trope, I arrive at a truth.

But of all the elements that he uses, my favorites are the daemons.

He has said that His Dark Materials and The Book of Dust are not fantasies, but stark realism. He writes about "real people, like us, and the story is about a universal human experience, namely growing up. The fantasy parts of the story were there as a picture of aspects of human nature, not as something alien and strange. For example, readers have told me that the daemons, which at first seem so utterly fantastic, soon become so familiar and essential a part of each character that they, the readers, feel as if they've got a daemon themselves. My point is that we all have. It's an aspect of our personality that we often overlook, but it is there. I was using the fantastical elements to say something that I thought was true about us and about our lives."

Yes. That's it. That's exactly what I want to do. Maybe I should get some power tools? Or maybe just read his collection of essays for more insights.