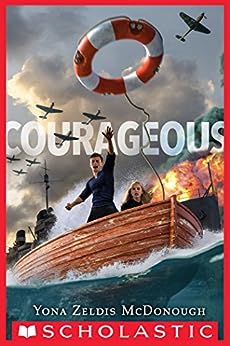 The idea for Courageous wasn’t even mine.   An editor at Scholastic contacted me and said the idea for a middle grade book about the evacuation at Dunkirk had been approved in-house and that they were looking for a writer; might I be the one?  Since I had already done something similar with The Bicycle Spy—Scholastic had handed me the idea and I developed it into a successful  book—I knew that this was a way of working that challenged me, in a good way, so I was game to try it again.  I fleshed out the synopsis, wrote a few sample chapters and waited; in a few weeks, I was told that I had the job.
I knew very little about what happened at Dunkirk before I started researching it, but what I found out intrigued me.  Rather than a military victory, Dunkirk was a retreat in which the real heroes were not soldiers, but brave British civilians who stepped in to save their boys—and a lot of other boys too.  I loved the idea of writing about ordinary people, like Aidan, Sally and the rest of the village, who risked life and limb to help the stranded troops.  In rowboats, fishing boats, and sailboats, armed with thermoses of tea and the occasional Union Jack, men and women crossed the English Channel and brought over 300,000 men to safety. It was a stirring, inspiring tale.
Since the movie was in wide release while I was researching and writing the book, I naturally went to see it.  I’m not a fan of war movies, and I approached this one with a sense of dread mixed with grim obligation.  Of course I was going to see it, but that didn’t necessarily mean I would like it.  To my surprise, I liked it very much and found it a nuanced and unexpected treatment of the subject.
Courageous in no way resembles the film.  But it was through watching it that I was able to expand upon my own story, giving it both texture and heft.   For instance, watching several scenes that took place on the beach, I realized that the soldiers would have sand everywhere—in their boots, their uniforms, their hair, mouths and noses.  And that soldiers who survived the explosion of their ship and landed in the water, would end up covered in grease and oil.  Such small but telling details helped make me create characters and situations that seemed real.
I was also able to inject my own beliefs about war into the story, and made it clear that while war may sometimes be necessary, it’s still a horrific experience for soldiers on both sides of the conflict.  I allowed George, Aidan’s enlisted older brother, to muse on what the death of a German soldier—a man even younger than he is—will mean to that boy’s parents, family and friends.   I took pride in conveying that in more than one scene, and developed the theme throughout the novel.
Writing about what you know and love is one kind of pleasure; writing to extend the breadth and depth of your understanding and awareness is another, and I’m grateful that writing Courageous gave me that chance.
~

Grab a copy of COURAGEOUS.
Keep up with Yona Zeldis McDonough.