Inspiration from a Literary Idol

My favorite book as a child, dreaming of someday becoming a writer, was Betsy and Tacy Go Downtown by Maud Hart Lovelace.

My favorite book half a century later, as a children's book writer with dozens of books to my credit, is Betsy and Tacy Go Downtown by Maud Hart Lovelace.

Throughout the entire Betsy-Tacy series, which begins with Betsy-Tacy (1940), where Betsy first meets Tacy at her fifth birthday party, and culminates in Betsy's Wedding (1955), we see Betsy making up stories for her best friends Tacy and Tib, scribbling stories on promotional pads from her father's bookstore, receiving her first rejection for a story, having her first publication for a poem, competing in her high school essay contest, and finally marrying a fellow writer and creating a home together where both of them can flourish as authors. 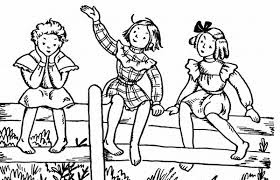 These might be the best books ever written in the history of the world!

My fervent fandom for the books has led to so many touchstones in my career as a writer.

Because the books are heavily autobiographical, I was able to visit Mankato, Minnesota, the "Deep Valley" of the series, and make a pilgrimage to Betsy's house and Tacy's house, now maintained as charming museums by the Betsy-Tacy Society, of which of course I'm a lifetime member. The crowning moment of my career - and life! - was when I did a book signing at Tacy's house more than a decade ago. 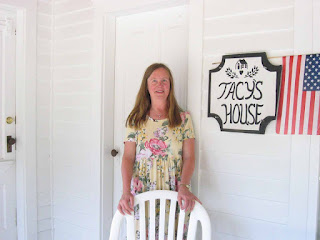 I've published half a dozen scholarly articles on the Betsy-Tacy books in academic children's literature journals, and in 2017 I received a grant to do research at the Kerlan Collection at the University of Minnesota, where Lovelace's papers are archived.

There I was able to witness first hand the meticulous research Lovelace did for each book, not relying on her own memories, but poring over back issues of Ladies Home Journal to note titles of magazine articles, products featured in advertisements, changing fashions, mentions of popular songs and dances, recipes, and more. She also engaged in voluminous correspondence with childhood friends fictionalized in the books, pumping them with questions like, "What were your religious beliefs about the time you were a sophomore in college? Did college work any change in them?" - favorite music ("Name pieces"), family traditions, personalities of their siblings, and further details about favorite stories, like "the time you took your grandmothers to the circus."

My favorite line in one of these letters, to Marion Willard (the original for Carney in Carney's House Party), was this one: "I can assure you that . . . as in the previous Betsy Tacy books . . . all the characters with any resemblance to living persons, living or dead, will be handled with loving kindness."

That has become a touchstone for me in my own writing: to handle all my characters (even though mine are almost entirely fictional) with the loving kindness that radiates through every Betsy-Tacy book.

At a silent auction at one of the Betsy-Tacy fandom conventions I attended, I even had the chance to purchase - yes !! - half a dozen ACTUAL PAPERCLIPS "used by Maud Hart Lovelace for her Betsy-Tacy manuscripts and research notes." 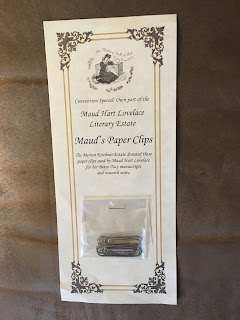 I've never yet opened this little packet or dared to place one of Maud's paperclips on my own manuscripts or research notes. I don't think I've ever yet felt worthy. Maybe I'll try to be brave enough to use just ONE of her paperclips in the coming year, hoping it will imbue what I write with her magic, with her wise and compassionate loving kindness. Maybe it will inspire me to try even harder to be for some other young reader the great gift she was, and will always be, for me.