Smack Dab blogger Laurie Calkhoven's MILITARY ANIMALS comes out at the end of this month.

From the publisher (Scholastic): 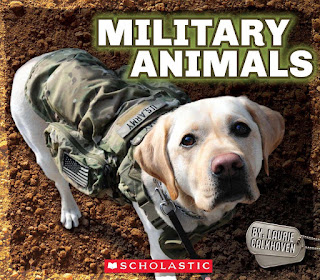 MILITARY ANIMALS showcases the most heroic animal stories throughout history where real animals saved the day!

Everyone knows that soldiers entered battlefields on horseback, but did you know that some warriors rode elephants into combat? You may have heard of bomb-sniffing dogs, but what about bomb-sniffing honeybees?

In MILITARY ANIMALS, you will learn all about these incredible animals that have aided the military in the air, on land, and by sea. Discover how dolphins, bears, pigs, penguins, and even glowworms became heroes in times of war. When technology couldn't help, these amazing animals could! Militaries around the world and throughout history have used animals to complete challenging missions. MILITARY ANIMALS will feature these true, hard-to-believe heroic animal stories, accompanied by action-packed photos.