Skip to main content
Posted by Tamera Will Wissinger May 14, 2014

Today, our own Smack Dab in the Middle Blogger, Tracy Holczer is participating in our “middleview” interview. Tracy’s debut middle grade novel THE SECRET HUM OF A DAISY released on 05/01/14! Congratulations, Tracy! This is the final stop on Tracy’s blog tour and if you read all the way to the bottom you’ll find a link where you can register for a chance to win a copy of THE SECRET HUM OF A DAISY!

Here is a bit about Tracy:

Tracy Holczer lives in Southern California with her husband, three daughters, two rather fluffy dogs, and two rats that are not so fluffy. Her debut middle grade novel, The Secret Hum of a Daisy, will be published in the US by G.P. Putnam’s Sons on May 1, 2014 and by Konigskinder/Carlsen in Germany 2015.


Here’s a description of THE SECRET HUM OF A DAISY:

Twelve-year-old Grace and her mother have always been their own family, traveling from place to place like gypsies. But Grace wants to finally have a home all their own. She thinks she's found it with Mrs. Greene and her daughter Lacey so when her mother says it's time to move on again, Grace summons the courage to tell her mother how she really feels. She'll always regret that her last words to her were angry ones.

Now faced with making a home with a grandmother she's never met, and according to her mother, didn't want her in the first place, Grace is desperate to get back to Mrs. Greene and Lacey. A mysterious treasure hunt, just like the ones her mother used to send her on, may must be the key. It all begins with a crane. And Grace is sure it's her mother showing her the way home.

Now it’s time to hear from our guest:

1. In a nutshell, what does your main character, Grace, want?

Grace wants to belong somewhere (just not with Grandma in that stinking small town).

Oh, EVERYTHING. Grandma, for one, who won’t let her move back in with Mrs. Greene and Lacey. Everyone knows that’s where she belongs. Mrs. Greene, who won’t let Grace come home. But mostly Grace is in her own way because she won’t accept the one and only thing she’s ever wanted: a community. Well, not at first, anyway.

3. Did you know right away that this was your story, or did you discover it as you wrote? How did the story evolve?

This story grew out of a short story I wrote years ago. That story was, at its heart, very similar to HUM in that it was about a girl whose Mom had recently died. Both stories have a grandmother who is difficult to love. Both stories are about people finding their way toward each other.
HUM evolved from the short story simply because Grace wouldn’t shut up. Even though I was writing another story, she dogged me day and night until I was nearly crazy from lack of sleep and the feeling that I was losing my mind. Finally, I got up one morning, stormed over to my computer and wrote the first chapter. It took me six long years after that, but it wasn’t Grace’s fault. It was a long slow process of learning how to listen more to what the characters need and want, and finding the conflict by not giving it to them.

4. Was THE SECRET HUM OF A DAISY always for middle grade readers or not? If so, why did you choose middle grade? If not, what had to change for it to be considered a middle grade novel?

HUM was always for middle grade readers. I don’t quite feel like I chose middle grade as much as it chose me. After taking a class at UCLA Extension, the instructor pointed out that I naturally floated toward telling a story from the child’s perspective and that I might give writing for kids a shot. Having not read middle grade since I was a child, I fell in love with the likes of Kate DiCamillo, Katherine Paterson and Sharon Creech. I was hooked and my writing seemed to fall in line for that audience.

5. What is the best part of writing for middle grade readers?

The idea that you are reaching them when their minds and hearts are still partially made of putty. Everything is new. They have so many decisions to make about who they are and what they want. A book could come along and impact those decisions.

6. Is there any downside?

7. Is there one question you wish you could answer about writing, your book, or the author's life, but have never been asked? Here's your chance to Q &A yourself. What would you tell your childhood self about being a writer?

I wish I could go back and tell my lonely, stubborn, fearful eight-year-old self that everything is part of a bigger picture. That if I just focus on putting one foot in front of the other, I will get myself there. I may be flighty and other kids might think I’m weird, but one day I will decide that flighty means creative and that embracing the weird is the best possible outcome for anyone.

As promised, here is the link to Tracy’s giveaway, which is open to US participants and includes a copy of THE SECRET HUM OF A DAISY, a $20.00 Amazon Gift Certificate, and a secret treasure: 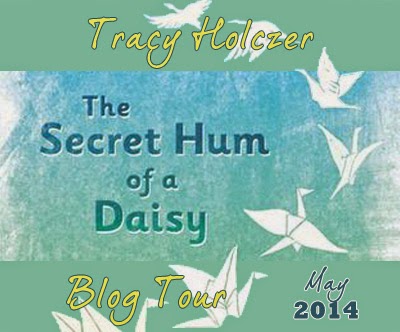 Here are all of the stops on Tracy's THE SECRET HUM OF A DAISY BLOG TOUR:

May 6: Writer, Writer, Pants on Fire May 7: Leandra Wallace May 8: Heidi Schultz May 9: AuthorOf May 10: Read Now, Sleep Later May 11: Kidlit Frenzy May 12: Literary Rambles May 14: Smack Dab in the Middle

Thank you for joining us at Smack Dab in the Middle Blog, Tracy. Again, congratulations on the release of THE SECRET HUM OF A DAISY!