STICKIN' WITH IT (February Theme) by Holly Schindler

I completely agree with the other Smack Dabbers who have already said that one of the coolest things about the writing gig is the fact that it’s so incredibly hard for a writer to whittle what they love most about writing down to a single favorite. No—not just hard. Impossible.

For me, it’s all incredible: That initial, thrilling spark of inspiration. Outlining the entirety of a new book. The first few rounds of exploratory writing that introduce me to my characters.

While I’ve often said that a first draft—especially the middle—isn’t necessarily one of my favorite parts, I can’t say that I completely dislike drafting, either. There’s just something about getting through the first draft that feels—well—triumphant.

And, as I’ve often said—I adore revising. Revision is when my book inevitably becomes three-dimensional.

I even love the letter that comes from an editor, and the excitement of looking at the book from another’s eyes—brainstorming how to make my current work come together, using that editor’s suggestions.

As geeky as it sounds, I really do love the entire process—and beyond. I anticipate release dates, and treasure the relationships I’ve forged with my readers through the blogosphere.

To the outsider, writing probably looks like a dull occupation—one that pits a face and a computer screen against each other for hours on end. Inside, though, it becomes a grand adventure. And I can’t imagine doing anything else.

But beyond the process itself, one of the most rewarding parts of my journey has been sticking with a dream long enough to see that dream begin to pay off. I don’t care what the dream is—to become a singer, actor, writer, artist…There’s going to be a time, in the pursuit of that fantasy, when it feels like the dream is kicking your butt, a little. I’ve talked often about my long and winding road to publication—how it took seven and a half years of full-time effort to get the first book deal. Nothing could have been sweeter than inking that first deal…and then seeing that first book hit the shelves a year and a half later.

Whatever your dream may be, there will be a point at which you’ll look at yourself and wonder what you’re doing. There will be giant obstacles—a class that feels impossible, or a time commitment, or a monetary commitment…life’s obligations will try to block you from your ultimate goal. But trust me—there’s just nothing like seeing the sweat of hard work begin to pay off…

Below: my dog "advertising" my two published books 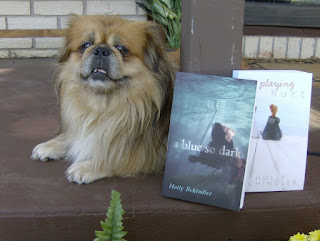