Feb. Theme: Falling in Love with Your Characters by Trudi Trueit

When I started thinking about the things that make writing so delectably fun, my mind was flooded! I love coming up with a fresh, new idea. I love writing first lines. I love ever-so-carefully building a plot. I love it when I’m struggling with a passage and then—boom—everything clicks into place. I love fan letters and meeting readers and holding workshops. But the thing I love most?

I adore the process of creating each of my characters, even the minor ones, like Mr. Quigley the lunchroom monitor, who carries 187 pictures of his cat, Clawed Monet, in a fold-out wallet. I must admit, there are a lot of folks roaming around inside my head. Like a cast of jittery actors backstage, each waits for his turn in the spotlight.

My novel may germinate from an idea, but it’s the characters who make it blossom. I keep lists of potential character names, always adding new ones as I hear them. I can’t start writing my book until I have settled on the full names of my primary characters. Then I’ll do a quick sketch of each character—and I’m no fancy artist—just so I can get some of their physical attributes from my head onto the page. 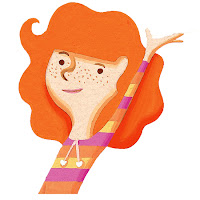 I talk to my characters. Because I used to be a journalist and if I’m not asking questions I am not breathing, I like to interview them. I will inquire about their favorite foods, music, hobbies, pet peeves, issues with their siblings, struggles at school - anything to find out what makes them tick. In the case of Scab McNally, my mischievous fourth-grade inventor in Secrets of a Lab Rat, I asked him to empty his pockets. That’s where I got the idea for his dead bug collection. For my miserable middle-child, Julep O’Toole, I asked her to write her feelings down in a journal. Some of her entries made it into the final book.

I know this may sound extreme, but in order for me to make a character convincing on the page, I have to believe she is real. When I am at my best, when I know that character from head to toe, I can sit back and let her drive the story. She communicates her wants and needs, in her own words. I merely dictate. In those times when I have tried to push the story in the direction I wanted it to go, to force the character to do something against her conscience, she will stop me cold. I can’t write a word.

I am grateful to my husband, Bill, who has, up til now, refrained from summoning the mental health professionals. When we are out and about he is used to hearing me mutter things like, “Cooper would break his leg trying that,” and “Julep would love this tee shirt.” Truth be told, Bill is my enabler. When I finished the Julep series, and was feeling a little blue, Bill presented me with a plastic, laser-cut-out figure of her for my desk. This year, upon completion of the Secrets of a Lab Rat series, I got a Scab figure, too! 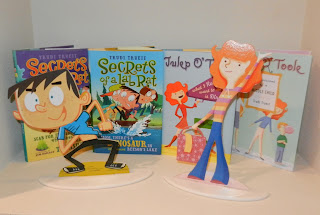 Of course, when you get attached to your characters, saying goodbye is never easy. But, sadly, it must be done. There are new stories to be told and new characters waiting to be born. Like this one . . . 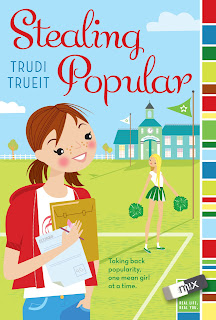 She'll be arriving this fall. She is a modern-day, middle-school Robin Hood, stealing popularity for the mean girls and giving it to the misfits. Her name is Coco Sherwood. She was a delight to get to know and yes, I already miss her.

So here's to breathing life into your characters! Make them real. Make them shine. And they won’t disappoint you.

Julep just whispered in my ear. She is not thrilled about sharing shelf space with an arm-farting fourth-grader.