February Theme: BOOKS I LOVE FROM 2011 by John Claude Bemis

This time of year is awards season, from the announcement of the Newbery winners to the upcoming Academy Awards. I’ll take this post to declare my love for a variety of books from last year. While not all are middle-grade, I hope all will appeal to fans of children’s literature. 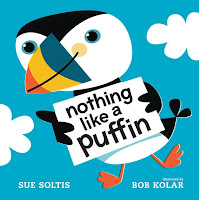 Nothing Like a Puffin by Sue Soltis and Bob Kolar was my favorite picture book from 2011. Funny and philosophical, this book beautifully considers what makes a puffin a puffin and not something else, essentially leading young readers through a playful logic puzzle to understand what makes us all unique. I’ve used this book in so many early elementary classrooms, and it’s an unequivocal hit.

Hopefully you have already discovered Tom Angleberger’s runaway hit The Strange Case of the Origami Yoda. If not, don’t wait another day. Last year brought not only the sequel, Darth Paper Strikes Back, but also a bonus Angleberger book Horton Halfpott Or, The Fiendish Mystery of Smugwick Manor; or, The Loosening of M'Lady Luggertuck's Corset.

Angleberger masterfully pulls off pee-stain-on-the-pants humor as well as unsentimental heart-string tugging, often in the same chapter. Horton Halfpott had me choking with laughter with its Downton Abbey-esque story that at times is hilariously bizarre and still keeps the Angleberger secret weapon for having characters with tons of heart.

While Brian Selznick’s graphic novel-novel hybrids have been a revelation for older readers, Eric Wight is working similar magic for a younger audience with his Frankie Pickle series. Last year brought the third, Frankie Pickle and the Mathematical Menace, of Wight’s comic book-early reader hybrids. Wight’s books blend the fantastical with the ordinary, as well as dynamic drawings of Frankie’s adventures through his own imagination with hilarious storytelling. I’m not sure who loves these books more - my four-year old daughter or me! She’s now convinced there’s such a thing as a “dryer sheet fairy.”

Another amazing middle-grade from last year was The Death of Yorik Mortwell by Stephen Messer. Messer’s macabre and funny story of a ghost caught up in a battle of cosmic proportions is at times Edward Gorey, at times Neil Gaiman, but mostly Messer’s own stunningly original style. The books have the added appeal of illustrations (why aren’t there more in middle-grade books!?) by Gris Grimly. As he proved in his debut Windblowne, Messer weaves tight, edge-of-your-seat stories of clever underdogs facing world-shaking forces.

The final book in the Everlost trilogy by Neil Shusterman, Everfound, came out last year. Don’t you love when you discover a great series when all the books are out and you can enjoy them all in frenzy? I don’t know why this trilogy isn’t buzzed about more. To me, Everlost is on par with fantasy epics like His Dark Materials and The Dark Is Rising. Officially labeled “young adult,” these felt completely and wonderfully middle-grade to me. Set in a limbo world between life and death, the complex characters and rich world-building left me wanting nothing more than to start back over at the first book and enter Everlost again.

Since I’m already breaking from the Smack-Dab format and hyping children’s books across age ranges, let me end with my favorite young adult novel from last year, This Girl Is Different by J.J. Johnson. Although I’m a fantasy author, I love realistic fiction. And the best young adult novels strike readers as a call-to-arms. This Girl Is Different begins with a homeschooled teen deciding to finish her senior year in a public high school as an experiment and grows into revolution against bureaucratic complacency and the everyday abuses teens face. Beautiful and inspiring!

Full disclosure, I know or have met all the above authors. While this might have led to my reading their books, it is my happy fortune to have discovered my 2011 favorite books in this way. I hope in them you discover some new favorites as well.