The gift that keeps on giving

When I first moved out of my parents’ house (mumble, mumble) years ago, I asked my mom to write down some of my favorite recipes so I could sustain myself in the wild. Mock chop suey, pasty, porcupine meatballs… Though I was happy to have my independence, the most powerful reminder of home that I carried with me would be the food I grew up.

Mom bought a special recipe book filled with sleeves that held note cards on which she’d written her recipes for everything I’d requested. Some were recipes that had been handed down from her grandmother, others were things she’d discovered in magazines and appropriated as her own. But all my favorite soups, entrees, and desserts were present and accounted for.

My efforts to replicate my favorite dishes yielded spotty success at the best. Initially, nothing turned out right. At first, I thought I was a failure at cooking. Then, I suspected Mom had intentionally sabotaged the recipes so that I would always be forced to return to her for the “real thing.” At one point, I bought duplicate sets of ingredients, took the recipe book, and went to Mom’s house, demanding we make side-by-side batches so I could see what I was doing wrong.

While making porcupine meatballs, I matched Mom’s every move… until she reached up into the cupboard, grabbed a couple packets of gravy mix, and added it.

Mom stared blankly at me. “Well, I always do this.”

In using the recipes she’d given me, I hadn’t taken one fact into account: like her own mother, Mom played fast and loose with recipes. She often improvised each meal, adding a dash of this or a smidgen of that but never following any direction exactly. She hadn’t tried to sabotage the recipe collection. She just didn’t stop to think about all the riffing she did. (She would later admit that there were several meals in my recipe book for which no recipe existed; she made them all up and actually had to cook the meal once in order to write down a semblance of a recipe for the book.)

Once I knew this secret, I began experimenting with the recipes myself, eventually getting them to taste more and more like Mom’s meals. To this day, it only takes opening up that old recipe book and scanning the note cards in Mom’s old-fashioned script to take me back to the comfort food I had as a boy in central Wisconsin.

This is our second Christmas without Mom.

With my father coming to visit my husband and I for the holidays, I asked Dad what kind of treats he wanted me to have on hand. His answer was the same I would have given if asked: Great Grandma Farrey’s Chocolate Drop Cookies. 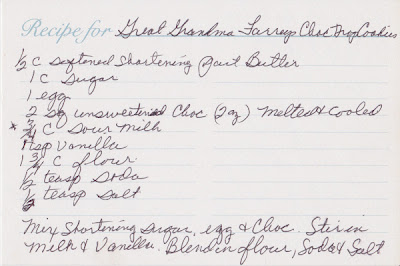 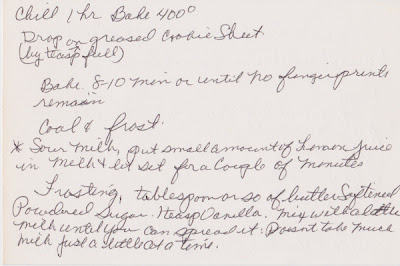 Every time I read this recipe, I smile. It’s SO Mom. “1/2 cup softened shortening part butter” What the hell does that mean?! “Frosting. Tablespoon or so of butter softened. Powdered sugar.” How much powdered sugar, Mom? A tablespoon? A gallon? A cruise ship full?

But I go with it. I improvise. I’ll be honest: I don’t think that’s something Mom set out to teach me. But in working the way she did in the kitchen and seeing how great things turned out, I’ve never once been afraid to just do my thang and see what happens. An unusual gift, to be sure, but one that’s served me well.

When I go through these recipes, it’s like she’s back. Her unique handwriting is enough for me to summon a very clear picture in my mind, hear her laugh, and even smell her cookies. Of course, the cookies that I made this year aren’t as good as Mom’s. Oh, Dad will tell me they are. But they aren’t. And I’m OK with that. Eventually, I’ll massage the recipe enough to make it my own. They won’t be Mom’s cookies. They won’t even be Great Grandma Farrey’s cookies. They’ll be mine.

How awesome is that?