Writing about the Holocaust for Kids--with an Auschwitz Survivor (Guest Post by Danica Davidson, Author of I Will Protect You) 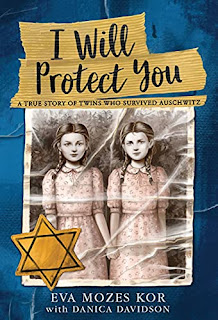 Eva Kor was elementary school aged when she survived the Nazi death camp Auschwitz as one of the twins a doctor there used for medical experiments. Later, as an adult, she became an educator on the Holocaust. When I met her in 2018 and she discovered I’d written and published 16 children’s books, she exclaimed that she wanted to do a kid’s book about her story.

I’d gone to see Eva speak at a college after experiencing and noticing an increase in antisemitism, starting in 2015. Eva was also grimly aware of this reality, and she told me passionately that the only way we can stop antisemitism — and other forms of hate, for that matter — is to reach kids in an accessible way. Since she was a child who had survived a death camp, this was an extremely rare opportunity to tell a true story about the heart of the Holocaust from a real child’s point-of-view.

Eva complained that Holocaust education in America, if it happens at all in schools, happens at age 12 or later. And then, she said, it’s too late, because the prejudices have already formed. She also talked about how smart kids are, and how so many adults ignore this fact and try to keep kids in the dark.

I knew about the Holocaust since elementary school. How could I not, when members of my own family were murdered? I grew up thinking all kids knew details of the Holocaust, but as time has gone on and surveys have shown a woeful lack of knowledge on the Holocaust, I’ve realized how wrong I was.


We began talking about ages, and how to write this book. Eva made it clear to me our book could not be sugarcoated, because sugarcoating or omitting important details of the Holocaust give people a false impression and make them think it’s not as bad as it was. It didn’t need to be graphic detail, but she wanted kids to know the realities, including the Final Solution.

“I think the youngest you can go for those sorts of details would be eight,” I said after thinking about what I had known about the Holocaust and had understood at different ages. I wasn’t sure how to write those details for younger than eight.

She thought about this for a while, then called me up and said she agreed. A little later, she told me she wanted the book to be for ages eight through twelve.

I couldn’t stop smiling when I heard that, because I’d published 16 books, and most of them were in this age range. In other words, I felt very comfortable writing in this voice.

“Middle grade,” Eva mused to herself, as if trying out the term. It seemed a little foreign to her, but also as if she liked the sound of it.

We threw ourselves into work. After interviewing Eva and telling her ideas I had, I began writing the book and emailing her chapters at a time. I tell the details of the Holocaust the way my father taught me in elementary school — with simplified language, enough straightforward context for them to understand, without sugarcoating details but also without going into nitty gritty detail on everything. Also, because it is a middle grade book, I didn’t end it right after the Holocaust, but ended it years later when Eva found healing as an adult. Eva hoped our book could help abused kids find healing, and know that you can heal after trauma.


Our book, I Will Protect You, was finished in early 2019, and Eva and I accepted Little, Brown’s offer for it in June 2019. Fifteen days later, Eva passed away unexpectedly while on an education trip to Auschwitz, knowing our book would be published, but not here to see it actually happen.

Grab a copy of I Will Protect You or add it to your shelves on Goodreads.