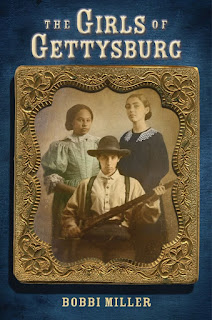 This month we are exploring Hot Dog Month. Full disclosure: I'm not a fan of hot dogs. But I am a big fan of summer adventures! This week I learned that my MG, Girls of Gettysburg (Holiday House, 2014), is now featured through the Gettysburg Foundation!  Am I ever excited to see the ongoing support this book continues to receive. Everyone should at least once in their lives visit the Gettysburg National Park, considered a turning point in the Civil War, the Union victory that ended General Robert E. Lee's second and most ambitious invasion of the North. Often referred to as the "High Water Mark of the Rebellion", Gettysburg was the Civil War's bloodiest battle and was also the inspiration for President Abraham Lincoln's immortal "Gettysburg Address". From June through August, many family programs explore the sights and sounds of this defining point in the American story.

My interpretation of the battle featured three perspectives that are rare in these historical fiction depictions: the daughter of a free black living seven miles north from the Mason-Dixon line, the daughter of the well-to-do local merchant, and a girl disguised as a Confederate soldier. The plot weaves together the fates of these girls, a tapestry that reflects their humanity, heartache and heroism in a battle that ultimately defined a nation.

The book began when I came across a small newspaper article dated from 1863. It told of a Union soldier on burial duty, following the Battle at Gettysburg, coming upon a shocking find: the body of a female Confederate soldier. It was shocking because she was disguised as a boy. At the time, everyone believed that girls were not strong enough to do any soldiering; they were too weak, too pure, too pious to be around roughhousing boys. It was against the law for girls to enlist. This girl carried no papers, so he could not identify her. She was buried in an unmarked grave. A Union general noted her presence at the bottom of his report, stating “one female (private) in rebel uniform.” The note became her epitaph. I decided I was going to write her story.

When I tackled the battle of Gettysburg, I had to first get the facts right. This was a daunting task because no other battle has been studied so thoroughly. I read A LOT to get these facts right. And then, there’s the emotional truth, the story behind the facts.


Historical fiction makes the facts matter to the reader.

If I didn’t get that right, creating characters true to their time and place, the readers wouldn’t care about the facts. For me, the only way to discover this emotional truth was to walk the battlefield of Gettysburg, and witness that landscape where my characters lived over one hundred and fifty years ago. I traveled to Gettysburg four times, walking the battlefield and talking to re-enactors and the park rangers.

As I pieced the story together, I took notes. I am a great fan of purple and pink post-its. I also like anything neon colored! I outlined everything. I wrote my first drafts in longhand. I find the relationship between pen and paper much more intimate, and demands me to go deeper into the character. Then, I transferred the story to the computer. But even as I edited the manuscript, I had to print the story out, and work with pen and paper again. I use recycled paper, to be sure!

But as we know, stories tend to be organic, and sometimes outlines, research, and all the "great plans of mice and men" need to be tossed as characters take over. In which case, I tag along for the ride. Even in historical fiction, with its challenging blend of story and fact, It’s as much about story-building as it is about story-creating. Mollie Hunter explores this process in her book Talent is Not Enough in which she offers:

"The child that was myself was born with a little talent, and I have worked hard, hard, hard to shape it. Yet even this could not have made me a writer, for there is no book that can tell anything worth saying unless life itself has first said it to the person who conceived that book. A philosophy has to be hammered out, a mind shaped, a spirit tempered. This is true for all of the craft. It is the basic process which must happen before literature can be created.”


History isn’t dull or dry, as textbooks would have us believe. It isn’t a list of dates and names, like a shopping list that no one remembers once the task is complete. History is real and relevant. The study of history, in essence, is a way of making sense of the present. As David McCullough once said, in one of my favorite quotes, “We are raising a generation of young Americans who are by-and-large historically illiterate. [But] there is literature in history.” History enlarges our understanding of the human experience, suggests Laurel Thatcher Ulrich, and as such, it needs to include the “stories that dismay as well as inspire.”

And there is no more powerful story to tell than that of the American Civil War.

When summer time has come, and all
The world is in the magic thrall
Of perfumed airs that lull each sense
To fits of drowsy indolence;
When skies are deepest blue above,
And flow'rs aflush,—then most I love
To start, while early dews are damp,
And wend my way in woodland tramp
Where forests rustle, tree on tree,
And sing their silent songs to me;
Where pathways meet and pathways part,—
To walk with Nature heart by heart,
Till wearied out at last I lie
Where some sweet stream steals singing by
A mossy bank; where violets vie
In color with the summer sky,—
Or take my rod and line and hook,
And wander to some darkling brook,
Where all day long the willows dream,
And idly droop to kiss the stream,
And there to loll from morn till night—
Unheeding nibble, run, or bite—
Just for the joy of being there…

I hope you are making history this summer!