One of the best pieces for writing encouragement I ever got was from Betty, a lady in Oxford, MS. She was a friend of my uncle’s and was helping me contact locals for a story I was writing about an employee of William Faulkner’s. The magazine I wrote the story for ended up not running it, but I loved the content so much (tons of priceless interviews from Faulkner’s family members and contemporaries) that I kept trying to find another home for the piece. One day when I was telling Betty of another market I’d tried, she said, “Girl, you are like a dog with a bone! You just don’t give up!”

Talent is a wonderful thing. But all the talent in the world won’t get you a finished manuscript or a publishing deal. The key to both of those things, in my opinion, is persistence. If you want to continue writing, you have to be relentless. You have to be that dog with that bone and clench your jaws tightly and not let go.

Now’s the part of the story where I tell you that I found the perfect home for the Faulkner piece and won some sort of award and basked in the accolades of the masses. It never happened. Or perhaps I should say, it hasn’t happened…yet?

I still have that piece. I wrote it in 2005. I’ve moved on to other pursuits in my writing career, but I haven’t entirely given up on it. I always feel that I never really abandon most of my projects, but I do put them on the back burner because there are only so many hours in a day and days in a week, so one has to prioritize. The main thing, though, is that even if you don’t finish or sell one particular piece, you don’t let that be the end for you. You move on to something else. You keep on writing. 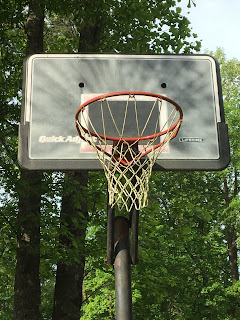 To move from the dog with a bone to another analogy, think of basketball. I am short and uncoordinated and have no skill at basketball, but there’s a basketball goal in my backyard. Even though I lack athletic prowess, if I go outside and try for a while, I can ring the basket once or twice. But if I were to practice daily, if I were to ask people who are good at basketball for tips, if I were to read about how to become better at basketball, then my chances would increase exponentially.

Writing isn’t exactly the same, of course, but I do think that with practice and persistence, you will find your own unique voice.

So throw that ball into the net, or clench your jaw and hold onto that bone, or think of it however you like, but keep on.

Ginger Rue is the author of the Aleca Zamm series from Aladdin and the Tig Ripley series from Sleeping Bear.