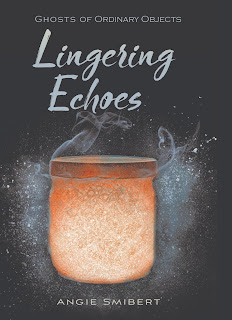 We're lucky to be joined today by Angie Smibert, whose LINGERING ECHOES (book #2 in the GHOSTS OF ORDINARY OBJECTS) just released with Boyds Mills Press!

Tell us all about the GHOSTS OF ORDINARY OBJECTS SERIES.

Set in 1942 in a small coal mining community in Southwest Virginia, the series is a blend of history, mystery, and a bit of magic/supernatural. Bone Phillips (12) discovers she’s coming into a family “Gift” as her grandmother calls it. With a touch, Bone can see the stories (or ghosts) in ordinary objects—and she doesn’t like it one bit. She loves stories but ones with princesses and gypsies and ghosts--not stories that are true. In each book, Bone explores her Gift and solves a mystery surrounding a particular object.

This is book #2 in the series. What were the challenges of writing book #2? How did you make it accessible to readers who might not have read book #1? What steps did you take to make it feel like a complete read, even though another book follows?

The tricky part is introducing characters and backstory from Book 1 without weighing down the beginning of Book 2. Lingering Echoes actually picks up not too much after Bone’s Gift, so I used a prologue to tie the two together.

To make them complete reads, each book in the series has a distinct plot and character arc. Through each, though, Bone is growing in her ability to use her Gift—and her rocky relationship with her aunt Mattie is a thread that runs through the series.

Where did the idea for Bones's gift come from?

Bone is a natural storyteller. She loves folktales, ghost stories, books, movies, and so forth—any story that isn’t real. She’s had a bit too much realness in her life. So, of course, I had to give her a Gift having to do with the stories of real people, ones who’ve left imprints on objects.

The idea for the particular gift came from some research into “psychic” talents, one of which is called psychometry. People who have this gift claim to be able to touch objects and see the past lives of that object or the people who owned them. Before I wrote the first book, though, I didn’t think this gift was something found in Appalachia—but I’ve since learned differently. After a couple of talks, I’ve had people tell me they have Bone’s gift.

Why did you choose this setting--the physical location and the historical setting?

Actually, I started with the place. Big Vein—the community in the books—is loosely based on McCoy, Virginia. It’s where my mother’s side of the family had lived for generations, going back to the 1790s. My grandfather and his brother were miners in a real mine called Big Vein, and my great-grandfather ran the store next to the mine. The mines in the New River Valley area stopped operating in the 1950s, so there’s really nothing left of the mines except the memories.

What challenges did you encounter writing a historical book for young readers?

With any historical book, one challenge is to paint a picture of time period the reader isn’t familiar with—without overdoing the exposition. Too little, and the reader doesn’t get what’s going on. Too much, and the reader might not care!

The other big challenge is to get many young readers to read historical books in the first place. I’ve had this conversation with several teachers and librarians. Since my series also has mystery and fantasy/magical realism elements, this makes the history more fun to read.

How much research did you have to do before you started writing?

Quite a bit! Luckily, though, I love research. Plus I already had a lot of the source material because it was also family history. A local church had put together a collection of family histories, stories, pictures, and so forth that was really helpful. And a local university had collected oral histories from miners in the area—and one of the miners was my grandfather’s youngest brother. I also researched Appalachian folktales and the history of their collection—as well as just about everything else having to do with both the time period and region.

How has your own childhood influenced your writing?

The idea for Ghosts of Ordinary Objects grew from a sense memory from childhood. I was living in Florida at the time. One lazy afternoon at the beach near my house, I was swimming (ok, floating along) in the water and had this sense memory of doing the same thing in the New River as a kid. I remembered that feeling of being the 12 year old tomboy, floating in the water up to my eyeballs, warm yellow sun on my face, the crickets and cicadas humming, as a coal train rattled by.  It was the feeling of summer and not wanting it end. It was also the feeling of not wanting things to change, to stay in that perfect moment, yet not be left behind as others grew up and moved on.

A younger me also had a head full of stories. Do you remember the first you actually wrote down? How old were you?

I did have stories in my head all the time as a kid. I’d mash up a little from a TV show I liked with a book or movie and created my own little universe. However, I didn’t really think about writing them down until I was an adult. In high school and the beginning part of college, I was so set on becoming a veterinarian that I didn’t even consider writing as an option—even though I had an English professor tell me I should be an English major.

How does teaching influence your writing?

Teaching—and particularly giving feedback to other writers—helps me hone in things I need to work on in my own writing. And when you’re trying to explain something to a student, that concept tends to crystallize in your head and make you more cognizant to applying to your own work.

A goofy dog and two bickering cats must mean your home is full of a devilish sense of humor! How do you feel a life with animals impacts your writing?

I’m now up to three bickering cats! Truthfully, they get along with each other and the dog. Most of the time. And most of the time, they’re not a distraction. (…although my newest cat does like to photobomb Skype sessions!) For ~97% of my life, I’ve had dogs and/or cats, so it’s hard to imagine not having them in my life or them not impacting my writing.  ;)

LINGERING ECHOES ends on quite the cliffhanger. ("The crowd gasped.") What can we look forward to in THE TRUCE?

As we speak, I should be working on the revisions to The Truce. It happens around Christmas 1942 and involves a body in the mine, some dog tags, Uncle Ash, and a ghost dog. 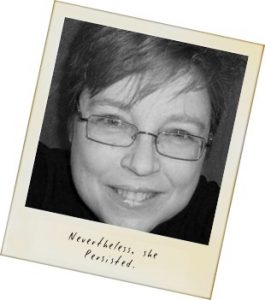 Where can we find you online?