A Writing Legacy -- by Jane Kelley 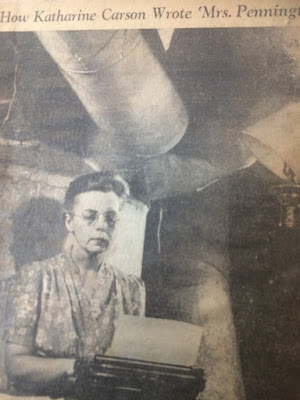 My grandmother, Katharine Carson, wrote in the basement. Prior to the publication of her fourth novel, she was photographed behind her typewriter, underneath some ominous air ducts. Her hair is pinned up in a utilitarian style. Her dress is plain. Her smile is non-existent.
Ah, the glamorous life of an author. And yet I imagine that the basement was her refuge. Upstairs, the house was full of relatives:  a demanding mother-in-law, an alcoholic brother-in-law, two quarreling daughters, and an authoritarian husband. Downstairs, two piles of paper—one whose pages crowded with her words and one whose pages were blank with infinite possibilities. 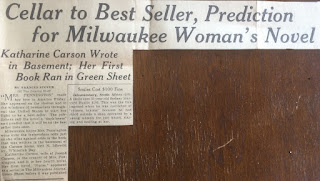 From cellar to best seller was not to be. According to family lore, the onset of World War II drowned out the story of Mrs. Pennington, a woman whose wise counsel holds her family together in the late 19th century. My grandmother’s fame was fleeting. None of her five novels are still in print.

I read them avidly, enjoying her clever wit, her succinct characterizations, and her depictions of people I knew were based on my ancestors.
She died when I was six. I doubt she had any idea that I would, after many detours, follow in her footsteps and become a published author.
If she had known, I wonder what she would have told me.
I think her advice about writing might have resembled the advice she gave my mother who couldn’t get me to eat a decent breakfast. "Put an extra egg in the pancakes."
In other words, cook something delicious, but make sure it’s nutritious.
And as her photograph shows, it doesn't matter where you write––just that you do.