What Are We So Afraid Of? By Chris Tebbetts

I’m going to take a tangent to this month’s topic (Villains) and share an excerpt from a lecture of mine, where I look at the role of FEAR in the creative process. Read on… if you dare. :-)

Resistance to the creative process takes on a lot of forms, but if we’re boiling things down to their nature or essence, FEAR is a good one-word candidate, evidenced in part by how much has been written about it. Books like “Art and Fear” by David Bayles and Ted Orland; “Big Magic” by Elizabeth Gilbert; and “The Courage To Write” by Ralph Keyes have been highly illuminating for me, and represent the tip of the iceberg, in terms of what’s been written on this topic.

So…what are we writers so afraid of?  Plenty, as it turns out. 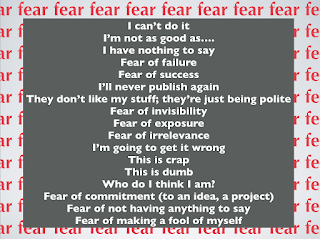 And thinking about all of that brought me around to thinking about the power of the WHAT IF question. WHAT IF is great for storytelling. What if a giant peach grew in my back yard?  What if deafness was a superpower? As it turns out, though, WHAT IF is also great for anxiety.  What if the elevator stops between floors? What if I need to get off the plane and I can’t?

I’m someone who has dealt with panic attacks on a number of occasions—especially in enclosed spaces—and it occurred to me a while back that my storyteller's tendency to ask WHAT IF also had an evil twin. As far as I’m concerned, the root of anxiety is all about projecting myself into an unknown – and as yet unrealized outcome.

How do you scare an audience? For one thing, you include doubt about the outcome. How’s it all going to turn out? What’s going to happen? Will they get there in time?

Likewise, a lot of writing fears – most of what’s in that previous image — turn on doubts about the outcome. What if they don’t like me? What if I can’t finish this story? What if I never publish again? To the extent that the key to anything is staying present in the moment, including writing, then fear about the unknown future is kryptonite.

On the other hand, as I continued to read on this topic, I found some good news, too. For instance, this idea:

FEAR IS A LIAR. 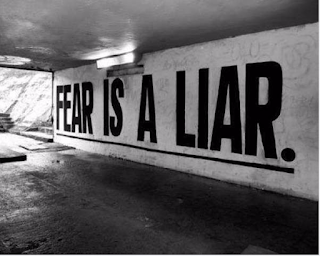 I love this image. For me, it’s truest in the middle of the night. That’s when my career always seems to be crashing and burning around me in the most convincing way – probably because I’m a captive audience, lying there in bed, where darkness turns my vision inward while I try to get back to sleep.

And maybe 3AM isn’t your problem. Some of you are captains of serotonin, I’m sure (and envious, too). But for the rest I encourage you to take a look at when you’re the most vulnerable to the lies you tell yourself. For me, it's taken some real effort to see those moments for what they are --- night time illusions that nearly always go away in the day, and usually because getting back to work is the perfect antidote. That awareness is no miracle pill, but it helps a lot.

Lawrence Block wrote:  “Once we are aware of our fears, we are almost always capable of being more courageous than we think. …. Fear and courage are like lightning and thunder: they both start out at the same time, but the fear travels faster and arrives sooner.”

Says Toni Morrison: “When you stiffen, you know that whatever you stiffen about is very important. The stuff is important, the fear itself is information.” And in The Courage to Write, Ralph Keyes says, “It’s important to distinguish between toxic and nutritious anxiety.” He refers to page fright, our version of stage fright, and the energy it can bring to the process.

The difference, I think, is between putting fear into the story—using the present writing moment to capitalize on that energy, even if it makes me uncomfortable – and, on the other hand, dealing with those future-minded fears, the ones that are based in all kinds of stuff I can’t know or control.

Anne Graham, daughter of Billy Graham, spoke about fear in a TED Talk radio hour podcast I heard.  She spoke about it as a natural, even necessary, companion on the way toward (in the case of her examples) enlightenment, but I’d extend that to the kind of truth-seeking we do in storytelling as well.  She spoke about Muhammed receiving the Koran—what she called the core mystical moment of Islam; and about Jesus on the cross in his last moments.  His final words, she says, were “Father why have thou forsaken me?” Muhammed, she said, “was held not by conviction but by doubt.”

These were moments of trembling and fear, not elation or enlightenment, even though that’s exactly what these people, or characters, were on the cusp of. “Abolish all doubt,” she says, “and what’s left isn’t faith, but absolute heartless conviction.” The results, for us, might be a didactic or even soulless story.  In religion, it’s fundamentalism. I love that quote, and I love that it came, for me, from a somewhat unexpected place.

Fear—the non-nutritious kind—is mundane.  In Big Magic, Elizabeth Gilbert explains it like this:

“If you pass your hand over a petri dish containing a tadpole, the tadpole will flinch beneath your shadow. That tadpole cannot write poetry, and it cannot sing, and it will never know love or jealousy or triumph, and it has a brain the size of a punctuation mark, but it damn sure knows how to be afraid of the unknown. Well, so do I. So do we all. But there’s nothing particularly compelling about that. Do you see what I mean? You don’t get any special credit, is what I’m saying, for knowing how to be afraid of the unknown.”

So, is there a bottom line here? I suppose for me, it would be this: Fear is part of the creative process. It’s also a shared (can we say universal?) element of making art in this world, and any time I spend hoping to avoid it completely is not time well spent. Rather, let me be aware of it, allow it to play its part in my writing process, and, above all, never let it stop me from forging bravely--or at least, semi-bravely--ahead.