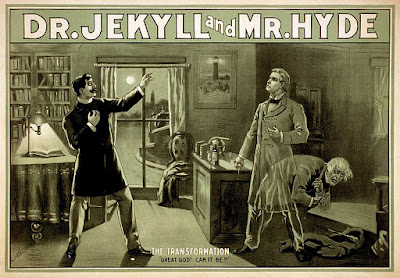 The novella has become such a part of our culture that I felt I knew the story without having read it. (I confess that when I was a child, I mixed up the two characters. I believed that Mr. Hyde was the good fellow and Dr. Jekyll was the bad one, based purely on the sound of the names.)

But it is Mr. Hyde who is so terrible that everyone he encounters shrinks from him in horror.  He has no super powers. He has no arsenal of weapons. In fact, the murder we witness was committed with a walking stick. So then what makes him such a monster?

I'll quote from what Dr. Jekyll says about him in the novella. "All human beings are commingled out of good and evil: and Hyde alone in the ranks of mankind was pure evil."

Dr. Jekyll should know. He created Mr. Hyde. In a confessional letter which we finally get to read at the end of the novella, Jekyll explains that he had suffered from his struggles to subdue his worst traits. To avoid feeling guilty, he embarked on an experiment. He took a chemical that enabled him to separate into two men. Jekyll would be good. But Hyde would be unfettered by compassion or morality or any of our better traits.

Hyde does despicable things. (Which the author decides not to name.) Jekyll suffers some remorse for this. He is also frightened to discover that sometimes he transforms into Hyde even without using the chemicals. Jekyll tries to quit letting Hyde lose upon the world, but Jekyll can't. He finds it unbearable to be completely good. "I began to be tortured with throes and longings." And when he gave in to them, "My devil had long been caged, he came out roaring."

No good can come of this. For many moral reasons, but also because the chemical runs out. No more can be found. Jekyll writes his confession and finds the means to deliver it to his friend (and lawyer). Then he does not kill himself--and his monstrous creation. Instead, he takes the last draught and turns back in Hyde in hopes that Hyde, being hounded by justice, will commit suicide. Hyde does.

Many have tried to identify what inspired Robert Louis Stevenson to create these characters and this tale. Some hoped that the tale was meant to show the dangers of straying from the path of righteousness. Some have wondered what were Stevenson's own dark secrets. Why doesn't he describe Hyde's actions in the novella? Certainly most other writers would.

I haven't read the biographies. I know little of his life. But I believe that he was not just exploring the duality of human nature. I think he was fascinated by his own powers as creator.

Jekyll was good. Hyde was evil. But we can't forget that Jekyll created Hyde. And refused to destroy him. So I wonder who really was the monster?

"In the small hours of one morning, I was awakened by cries of horror from Louis. Thinking he had a nightmare, I awakened him. He said angrily, 'why did you wake me? I was dreaming a fine bogey tale.' I had awakened him at the first transformation [from Jekyll into Hyde] scene."