THE PUSH FOR MARRIAGE EQUALITY: LESSONS LEARNED ON ANOTHER FRONT

Hi all! I'm going off topic this month, as part of my participation in the #Kidlitwomen initiative some of you may already know about. A Facebook page by the same name (Kidlitwomen) is using March, Women's History Month, as a launch for their initiative, focusing on solutions to issues of gender inequity within the Kidlit industry. If you'd like to join in, know more, and/or want to read other postings related to this subject from the many industry professionals participating, head over to Kidlitwomen on Facebook and check it out. 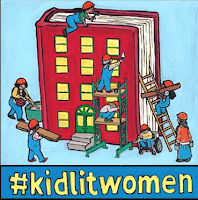 THE PUSH FOR MARRIAGE EQUALITY: LESSONS LEARNED ON ANOTHER FRONT

As I’ve been thinking about what I can contribute to the conversation on gender equity in the Kidlit industry as a male ally, I keep circling back to the work I did as a marriage equality activist some years ago. Between 1995 and 2009, I was as involved as I’ve ever been on a single issue, working at the grassroots, state, and (to a small degree) national level, including a stint as the Chair of the Vermont Freedom to Marry Task Force. And while I’m not suggesting that same sex marriage and gender equity in the workplace are direct equivalents, I do see some parallels, in their mutual focus on creating equality, and also, perhaps, in some of what we found to be constructive on the marriage front. In the name of brevity, I’ll stick to three examples.

1) STORYTELLING IS A CRUCIAL PART OF THE PROCESS.
In the run up to marriage equality in this country, the stories people came forward to tell from their own lives—for example, about being denied hospital visitation with a sick spouse; the complication of second parent adoption in some areas; and yes, the psychic toll of being seen as unequal in the eyes of the law—were at the core of our eventual success. Likewise, the #metoo movement has been immeasurably amplified by women who have been brave enough to share their own stories.

Within the #Kidlitwomen community, where we have a particular appreciation for the power of story, many of you have already drawn clear and compelling lines between the relative abstraction of the issues at hand and the places where those issues play out in very human terms. If my own experience is any indication, I’d say keep it up! In the end, it can be the most important tool we have when it comes to changing minds, changing hearts, and ultimately, changing the industry.

2) WARRIORS DESERVE DAYS OFF, TOO.
Honestly, I’m a bit hesitant to name this one, in this context. While I can relate to the inescapability of identity-based issues—I live every day as a gay man in a homophobic world—I also live under the cover of my own white maleness, which is where the analogy to living as a woman in a sexist world, or living as a person of color in a  racist world falls short. So with that caveat in mind, I do believe that it can be constructive to individually cut ourselves a break when the 24/7 of living with—and fighting against—inequality grows particularly heavy.

I saw Roxane Gay speak at the Antioch Writers Workshop a few years ago, and during her Q&A, there was a question from a young African American woman about confronting (and sometimes not confronting) racism from behind the cash register where she worked. To my surprise, Gay’s response began with something to the effect of, Listen, you’ve got to make a living. Cut yourself a break. As she went on, it came clear that her advice wasn’t about pretending these infractions don’t exist, but it was an invitation to look at what we’re each doing in the aggregate, and at what  we do accomplish alongside what we don’t, especially in the face of the very natural fatigue that comes from any ongoing fight for equality. If nothing else, it’s a strategy for the long run, allowing ourselves to recharge, and to show up again, and again, and again, when and where we can.

3) STAY IN TOUCH WITH YOUR OPTIMISM.
A big part of my optimism during the marriage equality movement came from what I experienced as the one-way door of public opinion on that issue. Along the way, I heard about some countless number of people changing their minds, from being against marriage equality to being in favor of it. By contrast, I never heard a single story about anyone going in the other direction—from supporting equality to standing against it. That’s not to say that it never happened, but at a statistical level, it was insignificant, at best.

And again, I’m not suggesting a direct parallel here to the issues on the #Kidlitwomen radar. The current political climate can certainly be counted as a backslide for women’s issues in this country, in more ways than one. For that matter, progress in areas of social justice rarely come without some kind of reinvigorated resistance from the opposing side. I lived in Vermont for years without witnessing any of the homophobic rhetoric that became (temporarily) commonplace during the marriage debate. So yes, it’s never a straight line toward the future. But with all of that said, I remain optimistic about the idea that bringing truth to light; sharing stories from the trenches; and, in the aggregate, creating a national dialogue—one that plays out around dinner tables, in the workplace, online, and at the policy level—can only help accelerate the kinds of changes we’re all hoping to see.