Six Stops on a Serendipitous Tour -- by Jane Kelley

Last month we traveled to Turkey. The history, the architecture, the scenery, THE FOOD -- all surpassed our expectations. But as I think back on our Odyssey, some of my favorite adventures were the serendipitous ones.

(The source of that word is also a pleasant surprise. In 1754, Horace Walpole used it in a letter to his friend. He took the word from a Persian fairy tale, The Three Princes of Serendip, whose heroes were "always making discoveries, by accidents and sagacity, of things they were not in quest of.")

We planned to take a ferry from Istanbul up the Bosphorus, until we could glimpse the northern edge of Turkey and the Black Sea.

On the three hour cruise, we passed Istanbul, palaces, parks, forts and villages. Just before the ferry docked at the last stop, my husband Lee took a photo of what we thought would be our best view of the Black Sea. 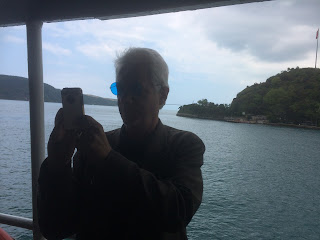 We got off the ferry at the village of Anadolu Kavağı. We would have two hours there before the ferry returned to Istanbul. 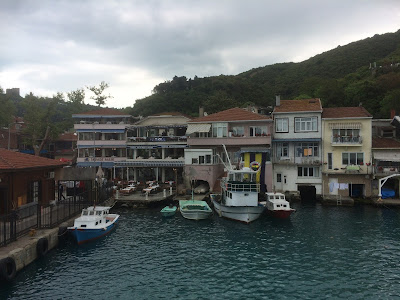 We planned to eat at one of the fancy restaurants that overlooked the harbor. But wait -- what was that ruined tower at the top of that cliff? Could we climb up there? And if so, what would we see?

We hurried past the waiters who shepherded us to their tables and climbed the winding cobblestone streets. A sign said "Kale" -- the Turkish word for castle. But we had no guidance after that until a group of dogs barked fiercely at us. Don't go this way! We were startled because most of the animals we encountered in Turkey were friendly. So we reluctantly turned around––and after a few blocks discovered the correct street that led up and up and up to the castle on the bluff. 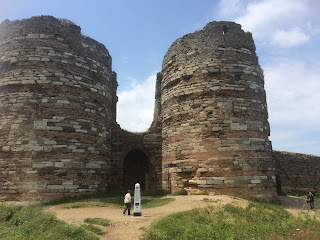 Yoros Castle was built in the 13th century. This strategic site was fought over by Byzantine, Ottoman, Genoese, and Cossacks. In present day, the Turkish military has a post near by. 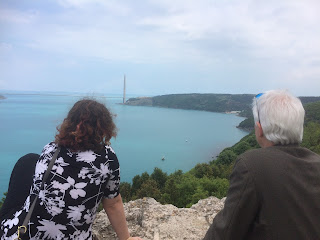 The view of the Black Sea was stupendous. And afterwards, just below the castle, there was even a lovely place to have çay and menemen (tea and tomatoed eggs). 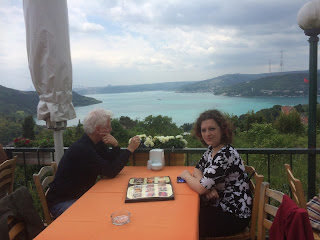 Truly a discovery made by accident, sagacity, and most importantly our desire for adventure.

How many times have you diverged from your writing plan and discovered the place you meant to be all along?