Interview: TWO TRUTHS AND A LIE

Today, we're joined by Ammi-Joan Paquette and Laurie Ann Thompson, the authors of the forthcoming TWO TRUTHS AND A LIE: 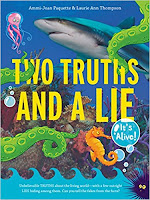 Two Truths and a Lie is the first book in a fascinating new series that presents some of the most crazy-but-true stories about the living world as well as a handful of stories that are too crazy to be true—and asks readers to separate facts from the fakes!

Do the two of you plan to continue your writing collaboration?

LAT: Yes! We have two more TWO TRUTHS AND A LIE titles already in the works, and are hoping we get to do many more. It’s been a blast!

2.       The bibliography is quite long and scientific. Who did the research—together? How long did it take?

LAT: We divided up the stories needed for the book and then each researched our own stories. The process was different for every story and the length of time varied. Our amazingly talented copy editors were a huge help along the way, double checking every fact for us and occasionally recommending additional sources. The research is super fun! Formatting bibliographies, however, is less so.

AJP: Spoiler alert—Laurie is way better at formatting bibliographies than I am! All the good stuff you see there is thanks to her. But yes, the research itself has been incredibly interesting. Sometimes we have to forcibly stop ourselves from tunneling out in all the curious and exciting directions that spark off these topics!

3.       Laurie, you seem to write non-fiction, while Joan writes fiction. Is this where truth and lies found common ground?

LAT: That was the original plan: I would write the true stories and Joan the false ones, since those were our strengths. We both ended up getting excited about stories on the other side of the fence, however, so in the end it ended up being fairly evenly split.

AJP: It’s been really fun to step outside of our comfort zones a bit and exercise muscles that each of us hadn’t used much before. And I think we have both discovered how much we enjoy doing something that we might not have taken very seriously before. I know I have for sure!
4.       You two are located in Seattle and Boston—so how did you handle the writing process?

LAT: Email and Google Docs and Sheets! Technology really facilitates this kind of collaboration, thank goodness. I don’t think being on different coasts hurt us at all.

AJP: Agreed. It’s hard to imagine something like this working in the day of paper mail and long-distance telephone calls. These days though, it’s a breeze—that is, the communication side of things, at least ;)

5.       The layout’s fantastic—every page includes something visually intriguing and sure to keep young fingers turning pages. Did you two have any input into the layout / design / illustrations?

LAT: Yes, we had lots of chances to give feedback and input along the way, which was so appreciated. Mostly, though, we just oohed and aahed and applauded the designer’s outstanding efforts! We definitely had a vision of what we wanted it to look like, but she took it to a completely new level.

AJP: It has been very exciting to see the project take shape visually—it adds so many layers and shades of meaning to the stories. This book absolutely could not be without our terrific illustration and design team (not to mention our fabulous editors!). It truly takes a village.

6.       This book seems absolutely perfect for classroom discussion. Was that part of the original idea?

LAT: I don’t think it was part of the original idea, but it did come up fairly early on. Our number one goal, however, was making the book entertaining for readers. Any thoughts about classroom applications were secondary. Hopefully we’ve managed to satisfy both without compromising either.

7.       In today’s political climate, do you feel that tapping into universal or verifiable truths is more important than ever?

LAT: Yes. We all have to be aware of the difference between fact and opinion. Sometimes our opinions are so strong and heartfelt that they can feel like facts to us. And sometimes we’re not comfortable with the facts as they are, so we chalk them up to opinion or flat out lies. I know I am as guilty of that as the next person, but I try to be aware of and challenge my assumptions in both cases. In this new world of information coming at us from all directions, we all have to learn to ask questions and be careful what we choose to believe and why.

AJP: It really is a whole new world out there, and kids these days are facing questions and dilemmas that we just didn’t have to grapple with as children. It’s our hope that this will be the kind of book that not only entertains but also shows the way to a greater awareness in social consumption, particularly when it comes to all types of media.

8.       What do you feel will be the role of juvenile print non-fiction moving forward (especially in the e-age)?

LAT: I think studies are showing that kids prefer paper (at least for now). Other studies have shown that we retain information better when it’s in print (having a definite frame, page numbers, etc.). So, I don’t think nonfiction for kids will be going out of print anytime soon.
AJP: Agreed! Paper will always be king in my book J


3.       Laurie and Joan have both found the path to publication to be a completely and total breeze.


(Okay, I'm kind of setting you up here. Our readers love path to publication stories—feel free to tell us yours. The bumpier, the more inspiring.)

AJP: I began seriously writing with an eye toward publication in 2003, and my first kids’ book was published in 2009. Two of my novels—Rules for Ghosting and ­Princess Juniper of the Hourglass—had 10- and 11-year gaps respectively from the time I began writing them till they were published. Never say never …

LAT: I started writing for kids in 2005. My first book came out in 2014. I don't think anyone would call 9 years a complete and total breeze.