When I brainstorm on paper it's messy. Here is a small example of what mine can look like: 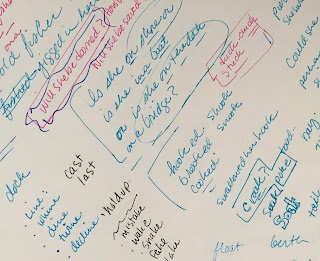 This was a brainstorm for a picture book that I was working on a while back. By the time I come to this stage, I know the basic concept that I’m after, but I need to figure out how to make it come together. For me that includes doodling, using colorful pens, making a mess on paper to get all of the ideas out of my brain, and generating new ideas and connections that I hadn’t been considering. Then it’s a process of sifting through the mess to find something cohesive that will stick together. Something that might someday become a book. That’s what happened with this brainstorm. After a long wait and many versions, those messy brainstorm notes became a picture book that released earlier this year called THERE WAS AN OLD LADY WHO GOBBLED A SKINK. It’s from Sky Pony Press and illustrated by Ana Bermejo.

I know this isn’t the right process for everyone, but it’s the one that works for me whether I’m brainstorming a picture book, a single poem, or a middle grade novel. How do you brainstorm?

Tamera Wissinger writes stories and poetry for children including Gone Fishing: A Novel in Verse from HMH Children’s, This Old Band, and There Was An Old Lady Who Gobbled a Skink from Sky Pony Press. Her second middle grade story, Gone Camping: A Novel in Verse (HMH), is also a product of the colorful messy brainstorm process and arrives in 2017. You can connect with Tamera online at her website, on Twitter, or on Facebook.