When the kids at school need advice in my newest book, Cici Reno #MiddleSchoolMatchmaker, Cici is the one they trust. She’s cool, she’s funny, AND she’s enlightened (thanks to yoga classes at her mom’s studio). So when her pretty best friend Aggie is too shy to speak to the boy she’s crushing on, Cici goes online and does the talking for her, Cyrano de Bergerac style. 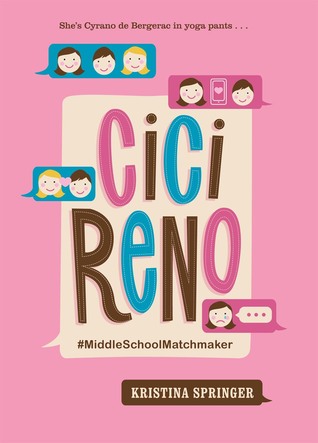 There’s a seed of truth in all of my books. Often times I’ll be reflecting on something that happened when I was the age of my characters and then spin it into a fun tale. When I was in 7th grade I took my own stab at middle school matchmaking. Back then, one of my close friends was majorly crushing on a boy from my brother’s soccer team. She said she really wanted to go on a date with him but was too shy to approach him herself. Well, we didn’t have cell phones or the Internet back then so there was no sending him a tweet or an e-mail. Instead we came up with a plan where I telephoned him, pretending to be her, and convinced him to meet me (really her) for a movie. The date was set and one Saturday afternoon we all showed up at the theater for the “date.” My job was just to support her and give her a shove into the theater to meet him and then go hang out and wait until she came back out. She was supposed to take a seat next to him so they could watch the movie together. But that’s not exactly what happened. She sorta panicked and dragged me into the theater with her. And then she didn’t say a single word to the guy! She was totally terrified. And she wouldn’t let me talk to him either. Instead, the two of us sat on one side of the aisle and the guy literally sat on the opposite side of the aisle. For the entire movie. It was so AWKWARD! And I felt really bad for him. When the movie ended, he left the theater and we waited to make sure he was good and gone before we exited. They never did discuss this disastrous “date” and we all moved on with our lives. That is, until I dredged up this memory for a scene in Cici Reno #MiddleSchoolMatchmaker where Cici’s shy bff Aggie has to meet the boy she’s crushing on for a movie date. Only things go quite differently in fiction.

Grab a copy of Cici Reno #MiddleSchoolMatchmaker from any of these outlets to find out what happens: