Skip to main content
Labels
Posted by Unknown May 10, 2015

There are some stories that mean more than others. For me, that story is WODODFORD BRAVE. Why? Because of my mother.

When I needed first-hand information for Cory Woodford’s coming-of-age story set during WWII, I turned to my mother, Thelma Kuhljuergen Thornton. At the time, I had no idea how my mother’s stories would continue to resonate long after the writing of WOODFORD BRAVE was done. But now, as I read through the ARC, I am struck with how vivid my memories are of sitting in Mom’s den and listening to her talk about living and loving during World War II. 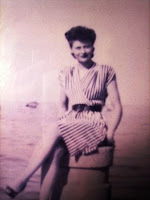 So while I read about how my main character, Cory, struggles with what it means to be a hero like his father who is fighting in the war, I remember Mom reminiscing about when she was a telephone operator and how on the day the Japanese bombed Pearl Harbor all the switchboards lit up at once; how all the operators knew something big had happened…they just didn’t realize how big it was at the time.

And as Cory searches for rubber tires to complete a go-cart in order to compete in a backyard competition, I’m remembering Mom telling how rationing was an inconvenience; that they all just lived with it because they had to…but that what was worse for herself and all her friends was the fact that the boys were gone to war and there was no one to date!

When Cory tries to convince his friends that it’s up to them to keep their town safe from a Nazi spy, I’m remembering Mom telling me how my uncle spoke at a rally to encourage people to support the war effort by buying bonds. 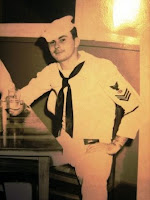 And when Cory and his friends go on a spy mission of their own and end up at the Veterans of Foreign Wars where girls dance with soldiers, I’m remembering Mom telling me about meeting a sailor who was home on leave because his ship had been torpedoed. A handsome man with deep-brown eyes. A sailor whose name was Robert Edwin Thornton.

WOODFORD BRAVE is not my mother’s story; it’s pure fiction. But weaving my mother’s experiences and memories through the pages of Cory’s story challenged me as both a writer and as a daughter because I wanted to get it right. For Cory.

And for my mother. Who just happens to be my best friend.