Guest Post: Our Journey To Publication by JillEllyn Riley and Deb Levine


I'm delighted to welcome Deb Levine and JillEllyn Riley to Smack Dab today! Their journey to publication of their co-authored SATURDAY COOKING CLUB: KITCHEN CHAOS is a lot like the story itself -- full of food, friendship, fun, and more: 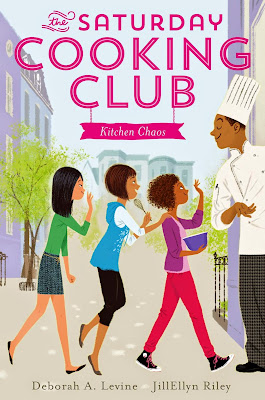 Can their friendships take the heat? A trio of mothers and daughters will find out when they sign up for a cooking class from a famous chef in the first book of the Saturday Cooking Club series—it’s mother-daughter bonding and so much more!

Liza and Frankie have always been best friends. But when new girl Lillian arrives from San Francisco, suddenly three’s a crowd. Especially after the trio is grouped together for a big sixth-grade social studies project—can they put aside their animosity long enough to succeed? When Liza suggests they all take a cooking class with the chef from her favorite cooking show for the project, the girls are on board, but they need an adult to take the class with them. It seems like the perfect opportunity to snag some quality time with their overscheduled, overstressed mothers…if they can convince them to sign up!

Several headaches and close calls later, the girls at last find themselves in Chef Antonio’s kitchen with their mothers in tow—but the drama is only just beginning!"

Our journey to publication began--literally--on a quiet brownstone block in Carroll Gardens, Brooklyn. Quiet might not be accurate actually. The block is disappointingly staid--underwhelming for Halloween trick-or-treating, for instance--but we met casually over the din of a whole gaggle of small children and toddlers, our own and other friends'. Bumping into each other sporadically in the neighborhood, as kids climbed over decorative iron railings or swung upside down from scaffolding, we realized that we both worked in media/publishing. We started to consult about our separate creative projects and discovered that we loved working together. We talk a lot, we laugh a lot, and we edit and revise each other's writing with ease, comfort, and very little ego. Then we had the idea of three girls in Brooklyn who long to make changes in themselves, their lives, and their families. Since most kids love to sift; stir; mix; concoct their own delicacies--and cooking shows are tremendously popular with kids--it seemed like an appealing way to watch our characters start to mold their lives. Taking inspiration from girls we knew, girls we once were, mothers we became, and the rich and varied population of Brooklyn--especially the incredible food options and traditions that abound--we dreamed up our three girls and their lives...

Since we both adore middle-grade books and their readers, it seemed natural that we'd write a middle-grade book ourselves. As moms of middle schoolers--and former tweens--we thought the pushing-away/pulling-closer dynamic between pre-teen girls and their mothers would add another layer to our characters' story. It didn't take long before we landed on the idea of a mother-daughter cooking class--and once we did, we realized we didn't have to contain our story in a single book. Envisioning The Saturday Cooking Club as a series rather than one novel helped us develop detailed character arcs for each of the girls, and a narrative thread between each book in the series.
After we'd plotted out the series, we had to figure out how we'd actually do the writing of the books as a team. I don't remember which one of us came up with the idea of alternating chapters in the voices of each of the three girls, but we decided in the very beginning that doing so would truly bring their unique personalities and perspectives to life for our readers. Narrating the book in three different voices also made it easier for us as co-authors to divide and conquer the chapters. And when we finally finished off the last chapter and clicked save, we discovered how close to our characters we'd become, and how much we were going to miss them when we weren't inside their three very different heads every day.


*Spoiler alert* the next book in the series, which will be published later this year, is written primarily in one character's voice, but the other girls definitely still have their say throughout the book.