Spooktacular October: Who Will You Be for Halloween? by Trudi Trueit

When I was kid, the moment the first fall leaf crunched underfoot, I had Halloween on the brain. I spent as much time as possible contemplating, debating, soliciting opinions, deciding, having second thoughts, and re-deciding about what costume to wear for that spooky, magical occasion. I drove my family nuts. But I had a pretty good reason.

At my elementary school, we had an annual Halloween parade. You brought your costume to school in a bag and for the final hour of the day, you changed into it and joined the parade of other kids. You strolled from one classroom to the next, showing off your costume and collecting goodies from the teachers along the way. If the kids in the other classes liked your costume they would clap and cheer. So for me, Halloween was more than just ‘what do I want to be?’ It was ‘WHO do I want to be? And how I can get the other kids to clap for me?’ For 364 days of the year, I was plain, ordinary Trudi, the nerdy girl in glasses lugging her clarinet to school. But on Halloween I could be anyone and I wanted to take full advantage of the transformation. I didn’t want to be a witch, ghost or puppy, because there were always zillions of those. I wanted to be unique. Original. Unforgettable. I went as a marshmallow one year, Lucille Ball (inside a TV set) the next, and the following year, a chef. I got the biggest cheer for that last one because I was the one giving out the treats. I handed out cookies!

And then something happened.

When I was in the sixth grade, a week before Halloween, my little brother, Dean, had a severe asthma attack. He was hospitalized for a few days and came home feeling much better. However, when Halloween night came, it was drizzly and chilly outside, so my parents decided it would be best for him to not go Trick-or-Treating. Dean was devastated. He loved dressing up in costume and T.O.T.-ing more than I did. As I left that night with a friend, I saw his teary face in the kitchen window. That’s the moment Halloween changed for me. That’s the moment I stopped thinking about myself. And came up with a plan. My friend and I went to every house in our neighborhood, collecting so much candy I could barely drag my pillowcase behind me. It wasn’t long before the light drizzle turned to rain and by the time I got home I was cold and soaked through. I handed the pillow case, and every last piece of candy in it, to my brother. He couldn’t believe it. I was giving him ALL of my candy. Yep. That was the plan. No other Halloween since has come close to topping that one. In 2005, I turned the experience into fiction for my debut middle grade novel, Julep O’Toole: Confessions of a Middle Child. 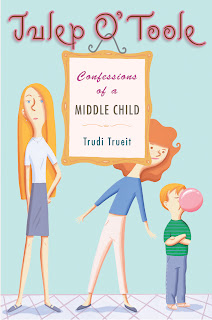 Funny thing is, when I look back, I can’t remember much about those Halloween parades at school. I can’t even remember what costume I wore in the sixth grade. But I will always remember the look on my brother’s face when I gave him that pillow case.

So if you’re a kid and you ring my doorbell this Halloween, you’ll probably get a little extra candy, just in case you have a little brother or sister waiting at home for you.