Halloween: A Day to Play (October Theme by Naomi Kinsman)

In my writing classes, I often play a game called Choices with my students. Basically, the point of the game is choosing one of two options, and the only rule is that you must choose, even if you love both options, or (more challenging) when you don't like either option. I like asking, "If you had to give up one of these two days, would you give up Halloween or your birthday?" You'd be surprised how many people would give up their birthday instead of giving up Halloween. The holiday is that important to them.

Which leads me to wonder. Why???

Here's the answer to which I've come. I think we (children and adults alike) love that Halloween allows us a chance to play. Aside from the candy, and the chance to frighten and be frightened, we dress up in a costume and act as though we're someone else, and our friends play along. It's similar to those magical moments when one child turns to another and says, "Wanna pretend we're on a desert island?" and the other grins and says, "Okay. And there's pirates charging toward us!" Then, after a short moment of eye contact in which the two agree that they're really going to do this, they turn and run, screaming, away from the invisible pirates. Our hearts race as we slide in behind bushes and peer out at our imagined enemy. We know no one is actually chasing us. But because someone else is pretending right along with us, the line between real and imaginary blurs, and for just a second, we feel emotionally caught up in the story we're creating. 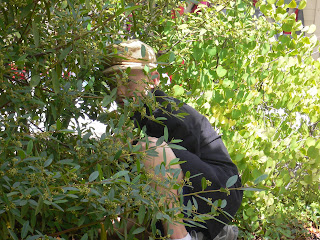 To tell the truth, I think we all need a little more of this kind of play in our lives. I stumble into it when I'm hanging out with my nieces and they ask, "Wanna play that..." and I push past my adult resistance and say, "Sure, and what if..." I stumble into it when brainstorming a story with a friend and spontaneously we leap to our feet and act out a scene as we play. I even stumble into it when I'm in the middle of a writing activity and a student offers an unexpected suggestion and we're off... creating and imagining together.

Playing together is important. Research has shown that the opposite of play isn't work. It's depression. My wish for you, this Halloween season, is that you find yourself stumbling into play. Where might it take you?
Labels: Halloween Naomi Kinsman October theme play