I feel like Sherry Holmes Baldwin, the (reluctant) heroine in Barrie Summy's adorable I SO DON'T DO SPOOKY. My interest in spooks and such is much more Casper and Ghost than Paranormal Activity (now in its 4th incarnation!).

Which is probably why one of my favorite books as a child was OLD BLACK WITCH. It's much more heartwarming than scary. There's main character Nicky and his mom who have just moved into an old house they are turning into a tea room. Well guess who lives in the chimney? Old Black Witch! 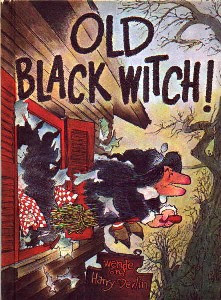 And then... there are some bad guys who want to steal the tea room money. Old Black Witch might have cheered them on in the past, but not now. She's a reformed witch, full of love and kindness -- and finally, the keeper of two fat toads.

I still have my old (1966!) copy, which has a blueberry pancake recipe on the back.

That's about as spooky as I get, folks. :)
Labels: irene latham picture book