I must confess. My first book was not a middle grade novel. In fact, it wasn't even fiction. Well, parts of it were fiction. Let me explain.

I did not enjoy math when I was a student in school. It seemed all we did was learn rules to move numbers around in meaningless ways. I could survive it, but I wasn't having any fun and I certainly wasn't interested. When I became a teacher I knew I had to do it differently than the way it was done to me.

I used various strategies, including lots of manipulatives, literature, acting, and art. Then I went to a teacher training event in our district. The speaker was a genius professor who was going to tell us about various aspects of problem solving. But, he never showed. A colleague of his who had arranged the event called him and found he was in California (we were in New Jersey). He had read his planning calendar incorrectly. So, this colleague (also a parent in our district), stepped up and took over and shared a project she was working on that involved creating long term, in-depth, challenging, math projects for kids. They were set in meaningful contexts and the math always made something happen. It sounded great. I knew right away that I could write something like this and implement it in my class.

The first project/problem I wrote was called "Haunted Mansion." I put the problem in the form of a letter from the fictional Rather and Veri Strange, owners of The Haunted Mansion Fun House. They gave my class the opportunity to create a floor plan for their new Haunted Mansion. It had to have a certain perimeter, include various exhibits, and allow for patrons to have at least 20 minutes of entertainment in the mansion. The kids looooooved it. So I kept writing more of these throughout the year. They couldn't wait for the next one.

Around about this time I was freelancing as an editor for a math series being developed by a friend of mine from a local math teachers organization. My friend (the president of the organization) asked me if I could sub in for him at a conference where he was supposed to speak. It was pretty last minute and I had never spoken at a math conference before. He told me I could talk on anything I wanted as long as it was math-related and lasted an hour. I wanted to say no, but I went for it. It was only an hour. I could live through that.

A week later, I showed up at the conference to a full room. (My friend was pretty well known in math circles). I was nervous that people might be unhappy with the change of speaker and topic. I apologized for my friend's absence and then launched into a share of these various project/problems I had developed; Haunted Mansion, Planet Zignox, Two-Dollar Pete, Recycling Robot and others. All of them featured fictional "clients" who asked the students via a letter, if they could use math to help them solve a problem or create something. The presentation went well. Quite a few people were interested and came up afterwards asking for copies or an e-mail where they could get more information. I was happily surprised.

Then after everyone was gone a woman came up and asked if I'd ever written a book which included these problems. I said that I hadn't. She handed me her card. She was an editor from Cuisenaire Publishing, a well-known math publisher. She asked if I would want to work with her to develop a book. 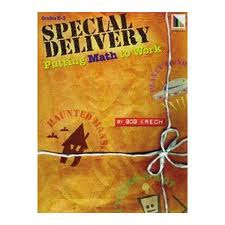 A year later, my first book, Special Delivery: Putting Math To Work rolled off the presses, all the result of having been in a room I didn't belong in, meeting an editor who hadn't come to see me, who eventually wanted to publish the results of hearing a lecture that never would have been given, if a genius professor had read his planner properly. Pretty lucky, right? I mean, mathematically, what were the odds? :)