One of the luckiest things that ever happened to me in publishing? That's easy. Being paired with the incredibly talented, supremely generous, and always-a-hoot illustrator, Jim Paillot!

Four years ago, much to my delight, Simon and Schuster gave Jim the assignment of illustrating my Secrets of a Lab Rat series. I was absolutely blown away by how he captured the spirit of the characters so vividly in his drawings. Three books later, he is still making me laugh. So let me introduce you to the four-leaf clover in my meadow of moss (I do live in Seattle, after all). Please welcome to the blog the incomparable, the extraordinary, the fastidiously punctual, Jim Paillot, And stick around, because at the end of the interview you can enter to win an original signed sketch from Jim (told you he was generous).


Trudi: Jim, when were you first drawn to art? (Sorry about the bad pun). 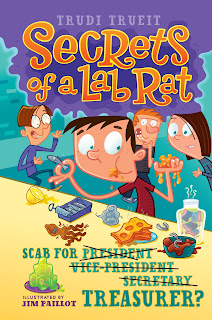 Jim: I remember the exact moment I decided I wanted to be an artist. In kindergarten - Salinas, California. A boy next to me named Arthur was doing a really cool drawing and all of us crowded around to see it. Since I also loved to draw it occurred to me that being an artist would be really fun. Normally, in kindergarten when something occurred to me it usually involved toys, candy or throwing rocks so that was a break-through moment for me.

Trudi: So how did you go from kindergarten artist to illustrating books? 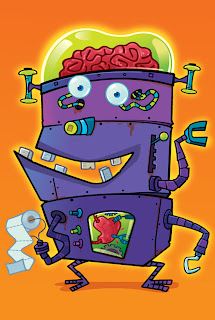 Jim: After college and a few years as a designer and art director for various companies I finally felt I might be able to make a living as a freelance illustrator. It was working out pretty well and I was creating artwork for lots of game companies, newspapers and magazines. Many of my favorite illustration heroes are book illustrators. I love books and I love illustration so it seemed natural that I should try my hand at illustrating books. Like many illustrators, I sent out promotional material to lots of publishers and then finally I got a small break. Dan Gutman had written "Miss Daisy Is Crazy" - book 1 of the My Weird School series. An art director for HarperCollins called and asked if I would like to work on it. Yes! We had a contract for only four books but because the series has been a success we are now working on book forty. Since then, I have been SO lucky to work on other book series including Secrets of a Lab Rat!

Trudi: Forty books! Wow! What I love is the way you can take an author's text and create an illustration with a fresh, new angle. An illustration you did for Secrets of a Lab Rat 3: Scab for Treasurer? comes to mind. In the text, I described Scab's nasty art project (a box filled with dead bugs), but rather than showing the art project you drew the teacher's horrified expression as she peered into the box. It was brilliant! The illustration left everything to the imagination and was hilarious. When you are coming up with ideas for an illustration, what's your process? 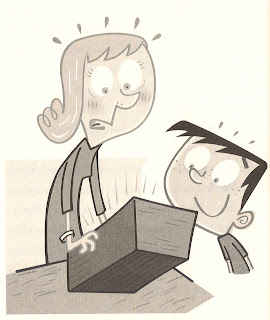 Jim: Thanks, Trudi! There are two ways I approach an illustration project. Am I going to draw exactly what the text describes or am I going to enhance the text by giving the illustration a distinct point of view? The second approach is usually better. I love to illustrate the text and help give the reader a unique point of view on the text. I try to stay true to the text - hey, the story matters!- but I also try to nudge the reader into a place where he/she feels their imagination is also an important part of making the story a success. The nasty art project illustration you described is a good example of that. No art I could have created would be as alarming as what the reader's minds eye could come up with. So I left the actual art project a mystery for the reader and focused on the horrified expression of the teacher as she looked at the ghastly piece Scab had created for his project.

Trudi: You've done so much, creating books, comics, food packaging, and even games! Is there nothing you can't do? What would you love to do, as an illustrator, that you haven't yet done? 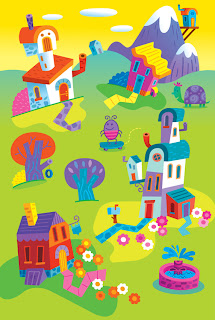 Jim: Aw... thanks again, Trudi. The list of things I can't do is long. I spend part of each morning in my sensory deprivation tank (that I keep stocked with carpet remnants and lunchmeat) adding more things to the list. For instance, I have never created a line of clergy-friendly tattoos. That idea may be before it's time. I have also never designed/illustrated a country's national flag. I am itching for a chance at that. I am seeing something universal and patriotic like a tiger or shark driving an 18 wheeler over a gorge of some kind.

Trudi: What are you working on now from the depths of your underground secret lair in Gilbert, Arizona? (I guess I shouldn't have mentioned the location, huh?)

Jim: My underground secret lair - the art bunker- has a mailing address of Gilbert, Arizona. But it could be anywhere. It's very mysterious. The only reason I have a mailing address is so that my "Crocheted Mammal Sweater of the Month" gift is always on time. I am working on art stuff all the time. I am writing and illustrating a book I hope to have completed this spring. Also, I continue to illustrate for the My Weird School series. Plus, you and I are working on a double, top secret book idea that may change the face of publishing as we know it. Or it may just make lots of readers laugh. Either one is ok. Also, I am part of a group show at a gallery in New York in August so I have to have a bunch of art ready for that. In between all that I have to play, hike and goof around with my wife and kids.

Trudi: Thank you so much, Jim, and best of luck with your show this summer in NY. That's pretty exciting! 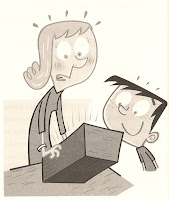 The sketch give-away is now closed.

Congratulations to our winner, Valerie S.!