Did you hear that whooshing sound?

This is book birthday week for my new picture book about, well, nothing. 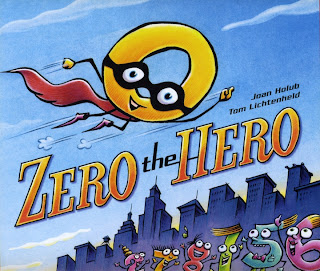 In keeping with the March Smack Dab theme of luck, it was my lucky day when NYTimes bestselling Tom Lichtenheld signed on to illustrate Zero the Hero. By way of introduction, he sent me this illustrated birdhouse he made with his niece. These were his first sketches of the characters. Pretty unique way to introduce them, don’t you think? Zero’s mask would eventually change color and relocate itself a bit lower. His shoes would get purpleyer and pointier. But his overall round-superhero-awesomeness vibe would stay the same. 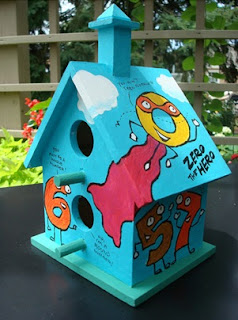 Tom and I also collaborated on a storyboard for the animated book trailer. The Henry Holt/Macmillan editorial staff did the voices for the trailer in-house. I keep wondering which voice is my editor’s, Christy Ottaviano. Maybe she’s number 9.

“Zero the Hero” is a phrase I first heard during a school visit about 5 years ago. The main reason Zero is considered a hero among numbers is because he’s a placeholder. Without him, we couldn’t do math. Just ask the Roman numerals. They don’t have a zero in their system, so all they can do is count.
But being Zero has its drawbacks. For one thing, he’s adds nothing in addition and is of no use in division. And don't even ask what he does in multiplication. (Hint: Poof!) Still, he knows he's worth a lot, and when trouble comes, Zero swoops down just in time to prove that his talents are innumerable!
Fun fact: I submitted Zero the Hero to Henry Holt as a dummy instead of a manuscript. Read my post about author dummies at Cynthia Leitich Smith's blog. Check out Tom Lichtenheld's comment at the end of the post to discover a good reason for dummying a picture book. (Hint: To attract an amazing illustrator!)
Click for buy links, printable Teacher Activity Guide, trailer, and more.
Giveaway: For a chance to win an autographed copy of Zero the Hero, please 1) drop a comment here about your favorite or luckiest number and 2) LIKE Zero the Hero on Facebook. Winner will be randomly chosen on the luckiest, greeniest, shamrockiest day of the year, March 17, and winning names posted here in comments.
~ Joan Holub
Labels: a book about nothing giveaway Henry Holt Joan Holub picture book round yellow superheroes Tom Lichtenheld Zero the Hero zip zilch nada