A Book's First Line Is Not Its MOST Important Line

A book's first line is not its most important line.

Ditto for the last line.

Instead, as both writer and reader, I place most weight on  - ta-dah! - the last line of the first chapter. For me, this is where the book's central dramatic question can be posed most crisply and distilled most succinctly. It clarifies for the reader what the book, most fundamentally, is about.

So in the first chapter of the launch title in my Nora Notebooks series, The Trouble with Ants, budding-scientist and ant-lover Nora decides to try to break the Guinness World Record for youngest person ever to publish an article in a peer-reviewed science journal. 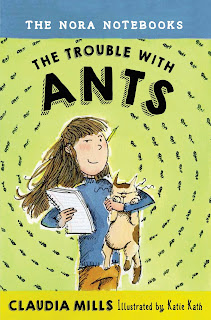 Nora's sure she's a shoe-in to smash the record: after all, isn't she already the leading ten-year-old expert on myrmecology, the scientific study of ants? She glances over at her ants scurrying about in their ant farm, and the chapter ends with this line: "They had no idea how important they were soon going to be to the future of science."

Likewise, in the final book in the series, The Trouble with Friends, I placed similar weight on the first chapter's closing line. 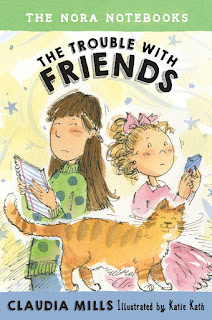 As the book opens, Nora's teacher gives his class a challenge to do something completely new over the course of the next six weeks, whether trying a new sport or musical instrument, eating a new food, learning a few words in a new language, or making a new friend, "preferably someone as different from you as possible." When Nora's nemesis, Emma, who is opposite from her in just about every way, approaches her with an invitation for a sleepover (the last thing in the world Nora would ever want to do),  I end the chapter this way: "A terrible suspicion began to form in Nora's brain: Emma's new project was her."

Now, I have to confess I read many brilliant, best-selling, award-winning middle-grade books that don't end their first chapter with that satisfying little CLICK! in the final sentence. But when I'm floundering in my own work-in-progress, nothing helps as much as tinkering with the first chapter's last line. It's where I answer the "What is this book about?" for me.