A couple days before New Year’s I was sitting in a theater seat, waiting for the movie to start, when my person next to me started talking about a friend who was about to pull out the contents of a jar she hadn’t opened (except to add to said contents) in a year. She had decided that, at the end of each week, she would write down the one thing that made her the happiest or had her feeling the most accomplished over the past seven days.

The movie started, and I thought little of that until New Year’s Eve when the conversation turned to resolutions. Every last person was reticent about sharing. So was I because I hadn’t yet decided exactly how to improve myself. With barely a thought, I committed to the Best Thing Jar. The more I thought about it, the more that idea excited me.

Too often, in writing and in life, we can get derailed by an isolated disappointment; especially one that lasts several days. But over the course of a week, it’s much easier to find something good even if it’s simply making a pan of delicious brownies or writing one unique sentence or making someone smile. 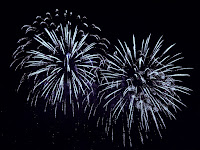 It’s my hope that throwing away the daily judgments will only make me stronger. And by the end of the year I can open my jar and be even the slightest bit wowed by what I’ve accomplished.
Happy New Year!