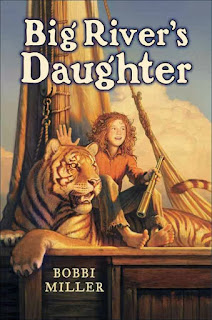 “This here story is all true, as near as I can recollect. It ain’t a prettified story. Life as a river rat is stomping hard, and don’t I know it. It’s life wild and woolly, a real rough and tumble. But like Da said, life on the river is full of possible imaginations. And we river rats, we aim to see it through in our own way. That’s the honest truth of it.”

So says River Fillian as she begins to tell her story in my first book, Big River’s Daughter. River’s story is an historical American fantasy, a blend of the tall tale tradition that captures so much of the American identity, and a unique form of fantasy. I have long been a student of tall tales, epitomized in the exploits of Annie Christmas and Mike Fink -- two important characters in River’s life. In true rough and tumble fashion, the heroes and heroines of tall tales mocked and defied convention. Their language was as wild and unabashed as the circumstance and landscape that created these characters. And that describes my character, River.

Wordplay is a powerful tool for the writer as well as the young reader. Language-- both the narrative and the dialogue -- was key to River's story. American folklore is unique in the world, and its characters like Mike Fink and Annie Christmas are absolutely engaging. More than this is the language itself. The language defies the tidy and restrictive, even uptight structure of formal grammar. It mocks the formality of grammar, in fact, pushing its boundaries by using pseudo-Latinate prefixes and suffixes to expand on the root. It plays with structure. The result is a teetotaciously, splendiferous reflection of a frontier too expansive for mere words to capture. By creating such a grand language, the frontier storyteller found a means to make an unknown frontier less scary. More than this, the grander language captured the bigger ideas.

To capture the language in River’s story, I  listened to storytellers tell their stories, and the best ones – like Eric Kimmel, Rafe Martin and Ashley Bryan – enrapture the audience. Theirs is the process of storytelling as old as human communication. We are story animals, suggests Kendall Haven (Story Proof: The Science Behind the Startling Power of Story, 2007). We have told our stories for over 100,000 years. Not every culture has developed codified laws or written language, but every culture in the history of the world has created myths, legends, fables, and folk tales.

Language is more than mere words. The rhythms and patterns, the musicality and the poetry of language. Such wordplay is important. Studies suggest that language acquisition is keyed to youth, and we can infer that language appreciation is similarly keyed. Young readers learn to appreciate the emotional and creative power of words. What else is at risk in this age of minimalist language and truncated text talk if the traditional tale fades away? If language reflects what lives inside us, our hopes, our dreams, our history, what does this truncated text talk reveal about us? LOL.

To capture the dialogue, I studied many readings, like Davy Crockett’s Almanacs (1835 – 1856), which included much of the language used by storytellers of that day. Of course, these were the days before the dictionary and so people spelled words according to how they pronounced the. And different pronouncements produced different spellings. And one cannot write about the Mississippi River without reading Mark Twain. I read most, if not all, of his books, annotating, deciphering, pulling apart words and sentences. Of course, whenever river men, like the western mountain men, gathered, they told their tall tales. They used songs and signals to call to each other. One of my favorites was from Mark Twain, which goes, “Who-op!” It means, “I’m here! Look at me!”

Another strategy I use to learn the musicality of language is the study of poetry. And one of my favorite is the playful, whimsical imagination of Jabberwocky, complete with its galumphing chortle:

’Twas brillig, and the slithy toves
Did gyre and gimble in the wabe:
All mimsy were the borogoves,
And the mome raths outgrabe.


“Beware the Jabberwock, my son!
The jaws that bite, the claws that catch!
Beware the Jubjub bird, and shun
The frumious Bandersnatch!”

He took his vorpal sword in hand;
Long time the manxome foe he sought—
So rested he by the Tumtum tree
And stood awhile in thought.

And, as in uffish thought he stood,
The Jabberwock, with eyes of flame,
Came whiffling through the tulgey wood,
And burbled as it came!"


Do you have any favorite poems that show jabber-play in action?