I (Holly Schindler, administrator at SMACK DAB) was thrilled to get my hands on this fun new MG from Mike Rich, the screenwriter of FINDING FORRESTER and THE ROOKIE. I was also delighted to chat with Mike about his book: 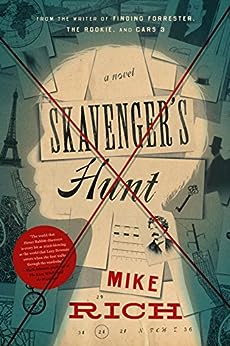 HS: Tell us about SKAVENGER’S HUNT—where the idea came from, how it originated.

Mike: I guess the seed was planted by the books I read when I was growing up. I was raised in a small town in northeastern Oregon, a great little place called Enterprise, and there was this terrific bookstore called “The Book Loft.” It’s actually still there! The story was inspired by books like “Charlie and the Chocolate Factory” and “The Lion, the Witch and the Wardrobe.” Those were the kind of books I loved when I was growing up.

HS: As an author, I find action to be one of the most difficult aspects of writing. It’s tough to strike that perfect balance: providing enough detail to make sure your reader can visualize what’s happening but not giving so many details that the reading gets bogged down and clunky. How did your experience as a screenwriter (heavy on action and dialogue) help writing a book? How is the process of writing a book different or similar to writing a screenplay?

Mike: It’s a night-and-day difference. If I’m writing a screenplay, say it’s a scene with a chase onboard a train, all I have to do is write a scene heading that reads: INT. TRAIN – DAY. The film itself will provide the description by showing the moviegoer the inside of a train at daytime. But in the writing of “Skavenger’s Hunt,” it was my responsibility to make every part of that train come alive in the reader’s mind through pure description. It is a tricky balance, though, especially with action sequences. I always had to be aware of whether I’d written one-too-many sentences, so that the moment itself doesn’t start to hit a lull.

HS: What kind of research did SCAVENGER’S HUNT involve? How do you approach including factual material in a project for young readers?

Mike: Even though “Skavenger’s Hunt” begins in present-day New York, the majority of the story actually takes place in 1885 New York…along with a few other places, but I don’t want to slip and reveal any spoilers. There was a LOT of research involved, starting with finding that one year in the late 1800’s that had an unusually large number of interesting events and personalities. I simply started researching one year to the next, until I stumbled upon 1885. Hopefully, the readers will know what I’m talking about when they read the book and discover the pretty sizeable list of cool things that were going on at that time. As for including factual material in a project for young readers? That’s the part that excites me the most! Interesting characters and compelling events are always going to be interesting and compelling, no matter if they happen now…or then.

HS: Was there a wild scavenger hunt from your own childhood?

Mike: Not this wild! Remember, I grew up in a small town, but I did take part in a lot of scavenger hunts when I was a kid. They were pretty conventional, though. Y’know, knocking on someone’s door and seeing if they had a paper clip.

HS: The middle grade mind is always in motion—leaping into the ability to understand more complex concepts while still being drawn to somewhat childlike attitudes and interests. How did you tap into the middle grade mind in writing SCAVENGER’S HUNT? Did you rely on your own memories? Experiences with children?

Mike: You’re right about the middle grade mind. I actually decided early on that the worst mistake I could make would be to intentionally write “down” to those young readers.  You can’t and you shouldn’t. They’re so smart! So I set out to constantly challenge them with puzzles, and riddles, and clues that were difficult; and I wanted to layer those challenges inside a narrative that they’ll hopefully find entertaining.

HS: One of my favorite lines in the book is “Henry usually found himself on the boring side of the window.” Who was your inspiration for Henry specifically?

Mike: Henry wasn’t inspired by one kid in particular, but by a good many who maybe aren’t seizing the thrill of adventure that’s right there in front of all of us. We live in a time where adults, not just young teens, spend way too much time staring at that tiny screen of our cell phones. So I guess it’s safe to say Henry’s a composite character whose isolation is made worse by the recent loss of his father. It’s also a message to parents that they should never ever hold off on introducing their children to adventure. Don’t wait till they get older. Do it now.

HS: As a kid of the ‘80s, some of my own favorite movies that I might classify as “MG” include THE GOONIES and STAND BY ME. What are your own favorite middle grade books, characters, or movies? How did those favorites play into shaping SCAVENGER’S HUNT?

Mike: Wow, you nailed my own list! I still love those stories that showcase the power of a group of kids with a common goal. So many times, in so many books and movies, the number of kids who become tight…is four. We even see it now in TV series like “Stranger Things.” For me, it was so excited to come up with my own foursome of young characters, each of whom had their own special skill or ability that allowed them to compete against intelligent adults from all over the world. Kids are resilient and creative. Adults usually stumble because they get bogged down by what can go wrong, instead of what can go right.

HS: We all know openings are important—in today’s fast-paced world, maybe more so than ever. I’m fascinated by the fact that so much study is being put into a movie’s opening credits (via artofthetitle.com, etc.). How important do you feel the “opening” of a book is? (Opening lines, cover art, etc.?)

Mike: I can only speak for myself, but when I’m writing a screenplay, I feel a responsibility to grab the viewer within the first three pages, which usually translates into three minutes on screen. If you wait much longer than that, you’re asking for trouble. Even though books are, by their very nature, longer than scripts, I used the same approach with “Skavenger’s Hunt.” By the end of the prologue, the reader has a good sense of who twelve-year-old Henry Babbitt is and the hurdles he needs to clear. I’ll tell you what our secret weapon is…Will Staehle’s incredible cover art. It’s one of the best book covers I’ve seen in years!

HS: So often, we don’t choose a project; a project chooses us. What called you to book writing after years in the film world? Why MG (rather than adult)?

Mike: It was a creative itch that I just had to scratch. I mentioned the bookstore I used to visit when I was just a kid. I’d look up at the books on those shelves and, every so often, catch myself dreaming of writing a story I’d see on THAT shelf as well. My wife and I are fortunate enough to now have three grandchildren, with a fourth on the way. I wanted to have something I could read to them.

HS: How did you come to work with Inkshares? What was the process like? How was it different (or similar to) screenwriting?

Mike: I liked the approach Inkshares was taking, seeking out new writers and giving them a chance. Even though I’ve had a lot of success writing screenplays, I was new to the process of writing a novel as well, same as a lot of other Inkshares writers. I think I was most surprised at how many layers of editing were involved; and, as it turned out, I was grateful for it. Story editing. Line editing. Copy editing. It was exhausting, but exhilarating at the same time. The other difference was how long it took to proof read my own writing. With a screenplay, which is usually about 110 pages long, I can zip through it in about 90 minutes. With a book, it takes a little longer.

HS: Another favorite line: “Time isn’t about time. Time’s about the moment.” Will we all be able to share more of Henry’s moments in the future? Any sequels planned? What are you working on now?

Mike: I sure hope so. By the way, that was one of my favorite lines as well, so thanks! I’d love for “Skavenger’s Hunt” to find enough of a reading audience that it makes writing a sequel an easy decision. As for what I’m working on now? Brainstorming the next story, which will likely be aimed at that same middle-grader audience.

~
We all appreciate Mike stopping by to chat. Be sure to grab your own copy of SKAVENGER'S HUNT!