An interview with author Christina Soontornvat

Christina Soontornvat is the author of In a Dark Land: A Changelings Story, which released last month from Sourcebooks. It's a sequel to her 2016 middle grade fantasy debut, The Changelings. I'm so excited to interview Christina on Smack Dab in the Middle. Her books embrace the element of imaginary play in a big way so they're right in line with our theme this month.

In the first book, 11-year old Izzy teams up with a crew of Changeling children to rescue her little sister Hen, who has been stolen away to the magical land of Faerie. In the sequel, life hasn't been the same for Izzy since she returned home. She's glad to be back on earth with her human family but can't stop thinking about the friends she left behind and the place she felt she truly belonged. When Izzy gets the chance to return to Faerie, she's quick to say yes. But once there, she must confront a dangerous witch, come to terms with a secret she's keeping, solve cryptic riddles, and lead her friends on a treasure hunt before the witch destroys everyone Izzy loves. But will Izzy get her magic back in time? 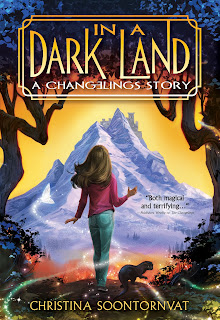 Q: Welcome, Christina! Tell us about your new book. What inspired you to write the story?

A: In a Dark Land is the follow-up to my first novel, The Changelings. Both stories are heavily inspired by my fascination with Changeling folktales, particularly the ones from Ireland and the UK that describe fairies snatching away babies and switching them with shape-shifters. I always wondered what happened to the human babies who were stolen. I also wondered about the Changelings, and why in the world they'd agree to come to earth and pretend to be boring, old humans. But the catalyst that got me to actually sit down and type the thing came from meeting my two nieces. I wrote the first book as a story for them, and then it just wouldn't leave me alone until I had crafted it into something much bigger.

Q: Did you plan to write a sequel when you wrote the first book? What were the challenges of writing a sequel?

A: Although I had some ideas for other adventures that Izzy and her friends could get into, I didn't plan on writing a sequel. I honestly didn't expect that my publisher would want to purchase a series since I wrote the first book to stand on its own. I was thrilled when they told me they wanted more!

My preconceived notions about sequels were that they should be easy. After all, you've already got the characters and the world built around them, right? But I found it much more challenging than I thought it would be! After everything I put my characters through in the first book, I had to find more ways for them to grow and change in the sequel. I had a really hard time and many frustrated days until I settled on what the theme of the novel would be. Once I decided that this book would be about identity and knowing and accepting one's self, that helped me craft arcs for each character. Q: I so admire writers of fantasy since I stick to realistic fiction. How do you go about creating another world? What was hard? What was easy?

A: That's so funny, because I'm totally in awe of realistic authors and how they create extraordinary stories in our ordinary world! For me, the easiest part is letting my imagination go wild. With In a Dark Land, I really went for it, and I think readers will see that in some of the new characters and settings (the half-rabbit warriors, the walrus women with their magical underwater puppet show). The biggest challenge is laying a solid foundation for my characters underneath all the magic. At its heart, a story has to be about what these characters want and need, deep in their souls, and the ways they overcome many obstacles to get there. So in that way, I think fantasy and realistic fiction are very similar!

Q: Did you like magical stories when you were young? What were some of your favorite middle grade books, then, and now?

A: I grew up feeling like an outsider in my tiny Texas hometown, so as a child, I loved escaping into fantasy. Some of my favorite books were Susan Cooper's The Dark is Rising series, The Lord of the Rings, and anything by Roald Dahl. I also voraciously consumed Calvin and Hobbes comics!

Q: Flip to a random page of In a Dark Land and give us a one sentence teaser.

A: The Piper looked at Izzy and Selden and said, "I suppose it's time I finally told you the truth." (And yes, that would be the Pied Piper. And no, he is not what the stories say he is, but you'll have to read to learn more!)

Q: What do you love best about Izzy?

A: Izzy's biggest strength is that she can step back and see situations from a different angle. She's always using her wit and creativity to solve seemingly impossible problems. I love that she's a hero, but a bit of a reluctant one. She has fear and she doubts herself, which I think is very relatable. But when her friends and family are at risk, she can dig deep and do almost anything to help them. 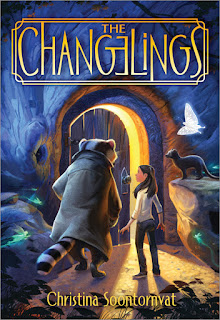 Q: What do you think kids will enjoy most about In a Dark Land?

A: This story is one big mystery, complete with a treasure hunt and rhyming clues! I have always loved books like that, where little bits of information are parceled out along the way, and I hope kids will enjoy that too. And if kids were fans of the Changeling children in the first book, they will love that they get to meet more of them in this one!

Q: I know you have a picture book coming out soon. Are you working on another middle grade book?

A: Yes, my first picture book, The Ramble Shamble Children, illustrated by Lauren Castillo, will come out in 2019. And I am indeed working on a new middle grade! It's a retelling of Victor Hugo's Les Miserables set in an alternate Thailand. And of course, there is magic!

Thank you, Christina, for visiting with us at Smack Dab! Check out Christina's new release here.

Michele Weber Hurwitz is the author of Ethan Marcus Stands Up, The Summer I Saved the World in 65 Days, and Calli Be Gold. Find her online at micheleweberhurwitz.com.