I (Holly Schindler, blog administrator) am absolutely delighted to talk again with Michele Weber Hurwitz (I'm a big fan of her MG THE SUMMER I SAVED THE WORLD IN 65 DAYS). I'm also delighted to announce that Michele will be joining us here at Smack Dab as a regular blogger!

Without further ado, my conversation with Michele: 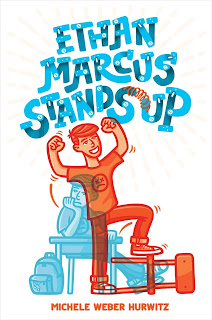 Tell us about Ethan Marcus Stands Up.

Seventh-grader Ethan Marcus, who often gets scomas (school comas) in class and suffers from what his dad calls ESD (Ethan Squiggle Disease), literally takes a stand against the long hours of sitting in school. One afternoon in language arts, he leaps out of his chair and does a spontaneous protest. Although that lands him in “Reflection” – his school’s answer to detention – the kind-hearted, science-loving faculty advisor steers him toward the school’s Invention Day event as a way to channel his energy. Ethan’s not a science guy – that’s his perfectionist sister Erin’s department – but he’s motivated by his passion and determination to invent something to solve his constant fidgeting in class. He comes up with an idea and recruits his best friend to help (Brian Kowalski, who’s equally science-challenged). But Erin doubts he can pull it off. She and her friend Zoe are taking their invention much more seriously, and this heightens Ethan’s and Erin’s sibling rivalry and tension. Not to give away the ending, but in a roundabout way, Ethan and Erin come to understand and support each other.

What drew you to the maker movement?

It seemed that everywhere I turned, there was a maker event! The maker movement is so popular with kids and I thought it would be a fresher approach than a science fair. Plus, that allowed the characters to make anything, not only do science experiments.

I was also inspired by my son, who was always a high-energy kid and once told me his brain “works better” when he’s moving. I noticed how the workplace was incorporating standing desks and walking meetings, but the majority of schools – especially as kids got older – still had the same old desks and chairs. For a lot of kids, prolonged sitting just drains their energy. My son always studied while standing or moving around, usually bouncing a ball. So, I wanted to write about a character who tries to change the classroom environment, even if he needs to go outside of his comfort zone to do it.

I like the fact that you have a pretty even mix of boy and girl characters. Was that a challenge – writing a book that's not necessarily a "boy" or "girl" book? Do you even believe in the distinction?

There are three boy characters and two girls, and all of them narrate the story. This was the first time I wrote in a boy’s voice, and it was a definite challenge. Not so much that they’re boys, but the characters are so different than me. One character, Wesley, is a tough, closed-up kind of kid
who’s having a rough time at home, and I had to work harder to get into his voice. I think that no matter a boy or girl character, it can be a challenge to inhabit the skin of a person who thinks so differently than you. I think (and hope!) this book will appeal to all kinds of readers. There’s certainly a lot in the story that rings true for middle graders, both boys and girls.

Describe the process of writing about siblings. Were your own kids an inspiration? Your own siblings? How so?

I have two younger brothers who are insanely competitive with each other and always have been. But for the book, I drew from my two older kids’ relationship. They have similar personalities to laid back, easy going Ethan and type A, always-on-top-of-things Erin. There are several scenes where Ethan and Erin totally get on each other’s nerves, and other times they try to understand, even empathize.
I love the notion that we all see the world from different lenses but when we take a closer look, we realize we’re not so different. This happens to Ethan and Erin as the story unfolds. Even though they’re opposite personalities, they eventually see how it’s better to champion each other instead of get annoyed and argue.

For fans of your work: How is this book similar to your previous releases? How is it different?

One aspect that’s completely different is the style. It’s written in a conversational back and forth format, with each character sort of “commenting” on what’s going on and giving his or her version of the events. It was completely fun to write the story that way, like you’d see kids commenting on each other’s social media posts. There is also a lot of talking directly to the reader. That can be a tricky element but it worked for this story. My first two novels – Calli Be Gold and The Summer I Saved the World in 65 Days – both had one girl narrator. All of my books, however, are about underdog characters who are passionate about wanting to change something. 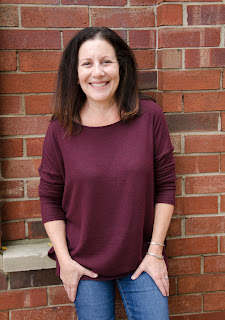 There’s a sequel to this book, coming in September 2018 – Ethan Marcus Makes His Mark. Ethan and Erin are nominated by the science teacher to attend a prestigious invention camp with brilliant kids from around their state. They aren’t sure if they’ll be able to measure up. But when they meet two new kids – Connor and Natalia – they dream up something that just might rise to the top. Not without some drama along the way, of course.
And I’m working on another novel. It’s a return to my sweet spot – a sole 12-year old girl narrator. I adore writing in the voice of a 12-year old just on the verge of 13. It’s a pivotal time in life, that bridge between childhood and adulthood, where emotions are ripe, friendships change, and transitions abound.
~
Michele is giving away 1 signed hardcover of ETHAN MARCUS STANDS UP! Use the form below to enter; if you have trouble viewing it, you can enter by commenting below.
a Rafflecopter giveaway