I (Holly Schindler, blog administrator) was delighted to get a chance to chat recently with Roxie Monro, an artist and illustrator for a wide swath of ages. Here, she gives us some insights into her creative process, the business side of art, and even lets us take a peek at her work station:

You’ve had some amazing accomplishments as an artist—including making the cover of THE NEW YORKER! Many of us at Smack Dab are familiar with the submission process for fiction; how is the process different or similar for artwork?

It’s been a long time since I’ve submitted, but I don’t think the process has changed much, except for the fact that when I got accepted, there was one art editor…Lee Lorenz. He chose (with the New Yorker’s editor at the time) cartoons, spots, covers – all the art. Now there are several different editors for cartoons, spots/illustration, photography, and covers. I began by submitting spots and was immediately accepted. Contributed them for several years; I was living in Washington DC at the time and took the train up to New York City a few times a year. I was so lucky – a couple years later I submitted two cover paintings, and they bought one right away. I immediately moved to NYC. I did not know a single person in the city. I soon made friends, though, with other cartoonists and artists.

In addition to being an artist, you’re also a writer. What brought you to the world of children’s books?

I’d been in NYC for a couple years and was trying to make a living freelancing and doing fine art. I constantly walked the city, feasting on the city life, the tall buildings, and busy streets. I decided to try to do adult book jacket covers – maybe city scenes. One day an art director suggested I see a children’s book editor she knew. I snippily said, “I don’t do cute; I don’t do bunnies and bears,” but, needing the work, I made the appointment with Donna Brooks at Dodd Mead (later Dutton Children’s Books). She said, “I think you have something to offer children. Call me if you get an idea.” One week later, waking up at 7AM, before my closed eyes I saw, in red capital letters against the black of sleep, “The Inside-Outside Book of New York City.” I called her up and said I had a title, but no idea if it was a book. I knew nothing about page turn, what the gutter was, how many pages are in a standard book, trim size – nothing. Regarding writing, I had qualified for Honors English in college and written a couple newspaper articles, but that was it. But I did the book, and it went on to win the NY Times Best Illustrated Children’s Book Award and was on Time magazine’s Best of the Year List. So, I figured I’d stick with doing kid’s books. ;-))

What’s your process as a children’s illustrator? What comes first—the story, which you then illustrate, or do you complete several illustrative pieces and then tie them together with a narrative thread?

The latter, more or less. I’m a “visual thinker.” After I get an idea or a concept, I’ll do a few sketches, and then a simple storyboard and dummy. That’s what I present with the proposal to my editor, not the actual picture book manuscript. Then I do research, refine the sketches, and do the art. I do not write the text until the art is completely done. Kind of the reverse of the way most editors prefer.

I don’t do digital art. I think there are basically two kinds of illustrators. Some, like my buddy Paul Zelinsky, may use a completely different media with each book – sometimes oil in a classical painting style, or maybe a cartoon-y method, with pastels or colored pencils, or sometimes he goes digital. I am the opposite. I use one favorite type of paper, colored inks, one familiar line thickness with my trusty Radiograph. I want to know my media thoroughly, so that my brain power doesn’t go into trying to figure out new materials. To paraphrase Flaubert: “… be regular and orderly in life, so that you may be violent and original in your work.” I save experimentation not for different media, but for the idea, the compositions, color, pattern. The Horn Book said of my latest book Masterpiece Mix: “Like so many of Munro’s books, this one is hard to categorize.” I liked that.

Any pictures you can show us of an illustration in various stages of completion?

Here’s some work from my drawing table making Masterpiece Mix. 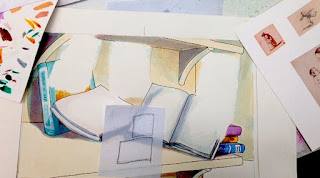 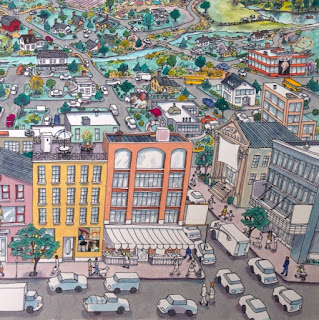 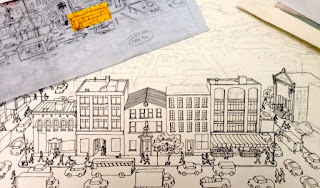 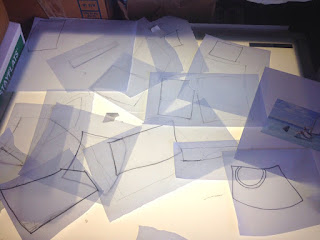 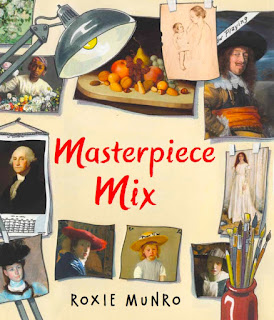 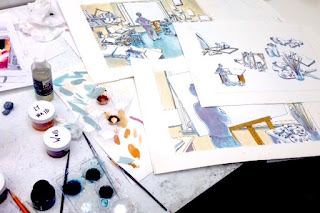 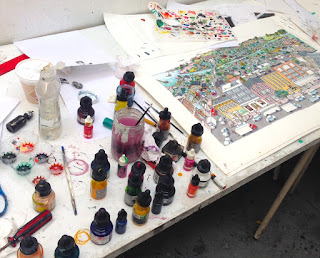 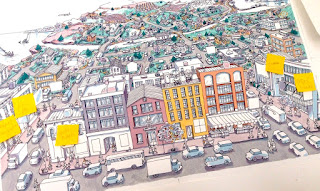 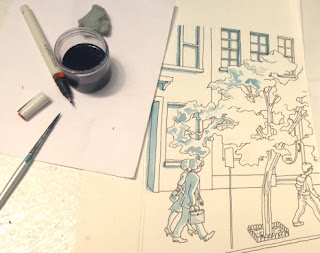 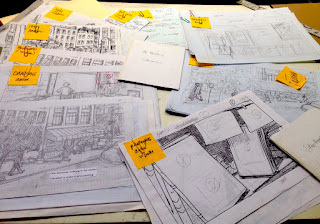 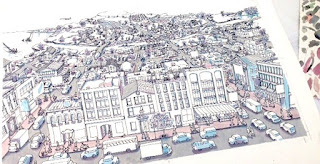 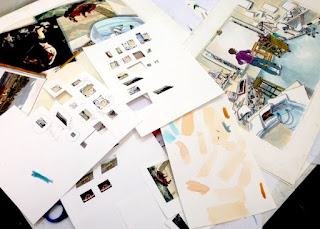 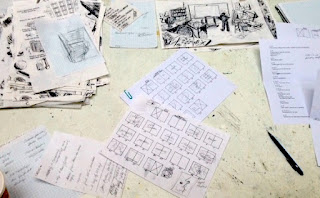 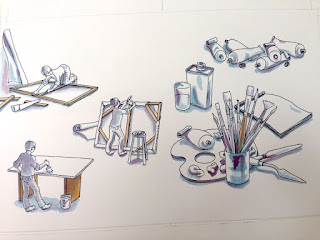 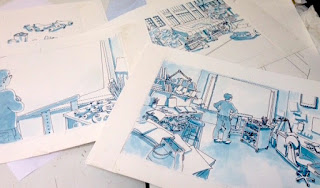 What’s one piece of advice you’d give anyone looking to make a living as an artist or illustrator?

Develop your own style (which evolves over time) and don’t worry about what’s trendy….to thine own self be true.

What can we look forward to next?

I have a book coming out in February called Rodent Rascals. The device is that all the rodents are shown actual size, which can get tricky because some critters, like the capybara, grow the size of a really large dog, so its whole body can’t fit on a page. Am waiting confirmation on another idea - a paper-engineered book. Like many of my books, this one is interactive and has an element of “gamification.” It’s a lot of work – I’ve done four moveable books, and did the engineering myself, which is hard and a real learning curve. But it’s fun!

~
Thank you, Roxie, for taking the time to talk with us! And please be sure to continue to keep up with Roxie online:
WEBSITE: www.roxiemunro.comTWITTER: https://twitter.com/roxiemunroFACEBOOK: https://www.facebook.com/RoxieMunroStudio