NO HOLDS BARRED --- by Jane Kelley

This month, I'm going to write with No Holds Barred.

You've heard the phrase. It comes from wrestling. You win a match by grabbing hold of your opponent and pinning her to the mat. But as in all sports, there are restrictions. You can't use illegal holds like headlocks. You can't pull your opponent's thumb or less than four fingers. You can't use a hold that restricts breathing or circulation.

But sometimes, you need to forget the rules in order to win. Sometimes, just like in this Hulk Hogan movie, you need to fight with no ring. No ref. No rules. 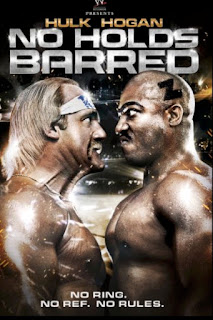 That's how I want to write. No holds barred.

For months, I've been struggling with an unwieldy project. I've tried to fix it by using my typical methods. I've adjusted the character arc. I've fiddled with the plot outline. I've added thematic descriptions. Funny minor characters. Inciting events. Exciting events. But all that thinking has been far too restrictive. I've spent more time analyzing the problems than writing the damn novel. It's time to say, no holds barred.

No Ring -- I won't restrict my imagination. I will find ways to explore uncharted territory.

No Ref -- I won't pass judgment on my ideas. I will allow myself the chance to make mistakes.

No Rules -- I won't use someone else's plan for success. I will be myself.

This November, I won't say "no." I'll do whatever it takes. I'll write with more abandon. I'll jump off cliffs and out of airplanes. I won't check to see if the parachute works or even if there is one. I'll leap.

And then, when that wild, passionate, inventive draft is done, I'll return to rules and regulations. Maybe.

Because in government, some holds should be barred.